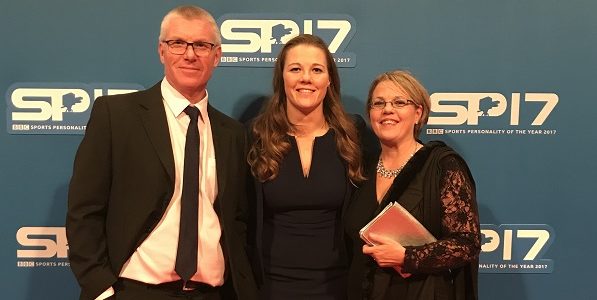 Our Wiltshire CAMHS Service Manager, Sam Shrubsole, has an extra reason for celebrating at the start of the new year: her daughter Anya Shrubsole has been awarded an MBE in the New Year Honours list, for services to cricket.

Anya Shrubsole is a fast bowler in the England women’s cricket team, and was instrumental in England’s Cricket World Cup win this summer

Earlier this year, Anya also was in the final twelve shortlist for Sports Personality of the Year: she is pictured above at the awards, together with her proud parents.

Reflecting on her latest honour, Anya Shrubsole told the BBC: “It’s pretty surreal – it’s not something I ever thought would happen at any point since I started playing cricket.

“I got a letter in the post telling me I’d received an MBE and my mum had accidentally opened it, so she knew a day before me.”

Proud mum Sam said: “I am very proud of all that Anya has achieved as a cricketer, but I am most proud of the person that she is, and how hard she works to achieve her goals.”

Many congratulations to Anya!