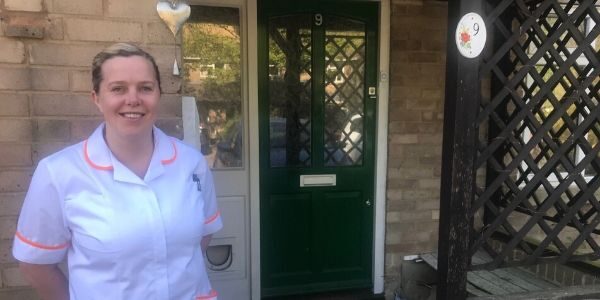 When nursery nurse Shauna Simister was re-deployed in April to the community care support team in Witney, almost everything about her working day – and night – changed radically. The community care support service provides care at home for people who have been discharged from a hospital. It is available for up to six weeks after discharge and aims to help patients re-gain independent living. Shauna was re-deployed as part of Oxford Health NHS Foundation Trust’s response to the COVID-19 pandemic.

“I am used to looking after babies and toddlers of 0-5 years old, working with families and dealing with sleep, toileting and breastfeeding. Now I was doing personal care for people at the other end of the age range, giving medication and making lunches and dinners,” she recounts.

For the first time in her life she was also working shifts.

“I found it extremely tiring. It wasn’t easy to get my body clock adjusted. I was constantly checking my iPad for my shifts, and I found I wasn’t eating that well if I finished late and had an early start. Or I might end writing my notes at home at 10 in the evening and then have to get going again at 7.30 in the morning.”

“I’m not going to lie; it was a challenge,” she says. But for everything she found tough, Shauna is quick to come up with a qualifier that she actually didn’t have it that tough.

“I was only doing morning and evening shifts, but there are many people who do all-nighters,” she says.

Or on wearing the personal protective equipment, face mask, visor and apron:

“It was hot! But I only ever had to wear it for 45 minutes or an hour and could then cool down in the car and put on a fresh kit at the next client. Some people have to wear it for the whole day.”

“And the main thing is, my PPE worked. We looked after people who had the virus and I didn’t get ill,” she concludes.

Shauna’s new role also came with a lot to learn.

“I’m not qualified as a nurse, so I had training on how to administer medication,” she explains. Because of social distancing, this training was done remotely on a video conference. Her induction to the new role was in person.

“We were a small group, and we had training in moving and handling, our own mental and physical wellbeing, and how to recognise a deteriorating patient

After that Shauna initially went out with an experienced team, shadowing them in action.

“I could then decide when I felt confident enough to go out by myself,” she says.

“I definitely learnt a lot of new skills. Before this I had never laid eyes on a commode or catheter and the most I knew of medication was paracetamol,” she laughs.

The hardest part of her re-deployment was doing end-of-life care.

“I’ve never been in that situation before, and I tried not to think of it as end of life,” she says.

Shauna is full of praise for the team.

“They were absolutely brilliant and made it so much easier for me,” she says. “My colleagues were grateful I joined the team, but they were just as helpful for me. Everyone was so warm, welcoming and friendly.”

Regular supervision with her manager was part of looking after herself for Shauna.

“It was so important to have someone to talk to; that someone was listening and could suggest strategies for coping,” she says.

Since July 27 Shauna is back to her normal role as a nursery nurse, supporting the Carterton, Witney and Chipping Norton health visiting teams.

“I had missed my colleagues and the families I work with – and they have missed me!” she says. For the time being all her work is done remotely on the phone or by video calls. The irony of the change is not lost on Shauna:

“I’m coming from such a hands-on role in the community care support team and now my own role is so hands-off, when it used to be totally hands-on. It’ll take some getting used to.”

Shauna’s locality team leader Lucy Richens-Rudra is happy to have her back. She said:

“I feel so proud that Shauna has been so humble about her re-deployment placement. She has certainly been thrown in the deep end, caring for older adults and being completely out of her comfort zone. Despite this, Shauna has risen to the challenge and I have received many accolades from her colleagues about her hard work and dedication. It is so lovely to have Shauna back in the Health Visiting service. She is an asset to our team!”