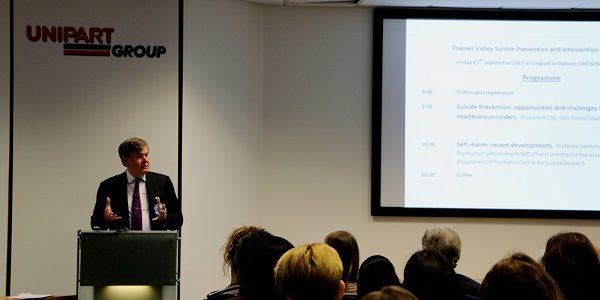 The 2017 conference brought together our staff and colleagues across Thames Valley to discuss how to tackle suicide.

In a full day’s discussion on Friday 15th September, participants at the annual Thames Valley Suicide Prevention and Intervention (SPIN) conference discussed topics such as the opportunities and challenges of suicide prevention, the growing problem of suicide in doctors, and how to optimise the benefits and minimise the harms of technology.

In the opening talk, Stuart Bell (pictured), the trust’s chief executive said, “We have a research focus on mental health, and a responsibility to shape that on a national and international level.”

2017 also marked the launch of the new National Institute of Health (NIHR) Oxford Health Biomedical Research Centre (BRC), which is only the second NIHR BRC to focus on mental health and dementia.

Professor Keith Hawton, the Director of the Centre for Suicide Research, said, “There have been recent developments and services are greatly improving. (But) a particular area of concern is levels of self-harm in the community, and young people not coming to clinical attention.

This is one of the major challenges we face at this time.”

“We must tackle the culture of naming, shaming and blaming”

Dr Clara Gerada, who has previously chaired the Council of the Royal College of General Practitioners, spoke about the growing problem of suicide amongst doctors. In an affecting presentation where she presented several case-studies, she said: “It is important to tackle the culture of naming, shaming and blaming.

We must allow doctors to have a sensible work life balance, and enhance discreet and confidential access to services.”

In a well-received talk about the pitfalls and promises of the internet and its role in suicidal behaviour, Professor Ann John, the Chair of a National Advisory Group on suicide and self-harm prevention, said: “The internet, just like other clinical settings, is another setting, but it is difficult to get a handle on.”

There is a significant relationship between internet addiction and self-harm and suicidal behaviour.

The difficulty is, that no one has defined internet addition. Is it time spent, or compulsion? (But) There is huge potential to deliver interventions through the internet, using it as a potential tool for outreach for health professionals”.

Our suicide prevention lead, Karen Lascelles said: “This the fourth SPIN conference and it is a shared endeavour, bringing people together regardless of backgrounds, and sharing experiences as a community interested in and committed to reducing and preventing suicide and supporting people affected by suicide.”

Earlier this month, Karen participated in a radio programme about suicide, alongside Lottie Stringer, who shared her experience of losing her brother to suicide. Lottie and her family founded Hector’s House, a suicide prevention charity.

The afternoon sessions at the conference focused on discussions on recognising the work that people are doing, and identifying ways in which we can make a difference.