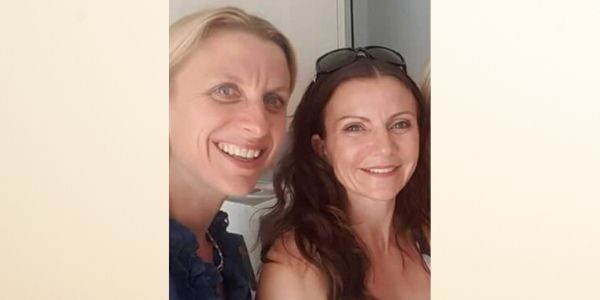 The power of art in the pandemic

Redeployed health visitor Karen Bisp had her portrait painted by friend Sally Bannister. “She has definitely captured my spirit.”

Karen Bisp and Sally Bannister have been friends for over 14 years, ever since they met as mums in a toddler group in Witney, where they both live. But when Sally suggested she would like to paint Karen’s portrait, both secretly felt a bit nervous.

Sally the artist thought: “What if she doesn’t like it?”

Karen the model thought: “What if I don’t like it?” 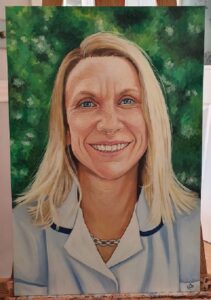 Both worries were needless: Karen loves her portrait and receiving it was hugely uplifting in the hectic weeks of working on the front line in the Covid pandemic. She is a health visitor at Oxford Health in Witney, but since early April she has been re-deployed to the Linfoot Ward at the Witney Community Hospital.

The change to her normal day and duties has been quite radical. As a health visitor she would look after babies and toddlers and work quite independently with families; now she is based at the ward doing shift work and looking after elderly patients. As a mum of three, whose husband also works shifts, she’s had to juggle childcare, home schooling and her shifts with those of her husband’s.

“I am normally a very positive person, but it has been tough at times,” she reflects.

Sally Bannister is a human resources manager in a local company in Witney, a mum of four and has always loved art. As a child she used to sketch and paint, but then she left art for a long time.

“I used to run a lot and what I liked about it was I could totally switch off. Now I can’t run anymore so I took up painting again. It gives me that same feeling. It’s very meditative; I totally lose the track of time.”

Sally got the idea for the portrait of her friend when she learned about Portraits for NHS Heroes, a collaborative project started by Oxford-based artist Tom Croft. He posted on Instagram that he would like to paint a free portrait for the first NHS key worker to contact him. He also suggested that other portrait artists might like to offer one, too. Artists were asked to post their portraits under the hashtag #portraitsfornhsheroes so everyone could be seen online in a virtual exhibition.

The project has been a huge success. At the time of writing the hashtags brings up nearly 10,000 posts which display a poignant testimony to those caring for others in the pandemic: in PPE and without, smiling or serious, alone or in company.

However, Sally was initially hesitant. She had only ever sketched her family and pets so the idea of a ‘real’ portrait made her nervous. She even wondered if she could take part in Portraits for NHS Heroes as she is not a ‘real’ artist.

“But then I thought of course I can. It’s been an amazing project and it’s a great advantage the work is online.”

She chose Karen as her object simply because “she deserves it” and wanted to give her a gift.

Karen says: “It was very flattering. I wondered if I should have it painted wearing PPE, to capture this time [of the pandemic]. But then I decided: no. One of the difficulties about wearing the mask is no one knows you are smiling, and I am a happy, smiley person. Sally has really captured my spirit.”

Now the 60×40 centimetre oil painting is waiting to be framed.

“I first hung in the kitchen, but my children said it freaked them out! It was as if there were two of me,” she laughs. Now it’s in the hallway, waiting for framing shops to open.

“I am happy to wait until I can get something really special to keep it safe as it is such a precious gift.”

To see all the great artwork, go to Instagram and search #portraitsfornhsheroes

If you would like to take part as an artist or a model, see Tom Croft’s website.