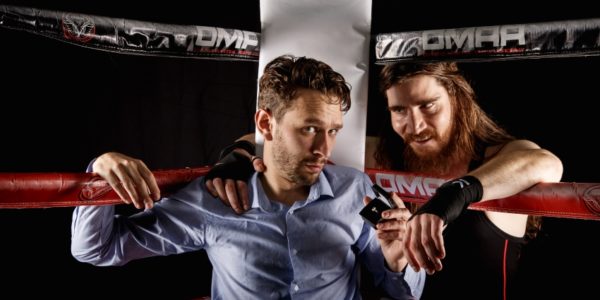 Unspoken: Our therapist centre stage in play on stammering

Speech and language therapist Catherine Woolley on her role as director

A fast-paced play exploring the effects of stammering on one man’s life as he plucks up courage to propose to his girlfriend is thrilling Oxford theatre-goers this week.

Called Unspoken, the hour-long play has been produced by Oxford Health’s speech and language therapist Catherine Woolley and is being performed every night until Saturday (Oct 26)  at Old Schoolhouse in Hertford Street. 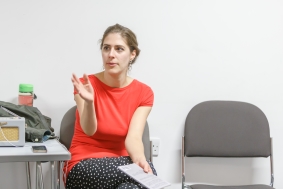 According to research one in every 100 people will have a stammer at some point in their lifetime, and while many stop by the time the reach adulthood, three per cent do not. Although relatively common it’s shrouded in myths and stereotypes.

Unspoken, which is being performed by the Oxford based not-for-profit organisation BMH Productions in association with UCL University and Oxford City Council, attempts to break down these negative portrayals and explore the way difficulty in communicating can affect a person’s life and emotional connections.

The show explores the world of Alex and his relationships with the key people in his life – his mother, grandmother, children/teachers at school and more.  It gives the audience get the chance to understand the impact of his stammer across his lifespan and how it has influenced the choices that he’s made. 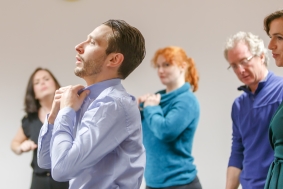 Stalking him throughout the show is the shadowy figure of the ‘Wrestler’, the personification of Alex’s stammer who is ready to render him silent at any moment.

Unspoken is a show about acceptance, with Alex’s journey more about accepting his stammer as part of his identify than it is about overcoming it.

Catherine’s  role in the production has been pivotal – not only as director but also costume designer.

She said: “Unspoken is fast paced, dynamic and surreal at points, but it is a production with a powerful story to tell.

“ It was written in collaboration with a specialist speech and language therapist as well as the local stammering community. While everyone’s experiences are unique, it has helped to ground the show in situations that affect the lives of people across the country.”

However, the play is more than just a performance. Before the show begins, the audience is invited to fill out a five minute questionnaire to get an understanding of their thoughts about stammering.

After the show, they will be asked to complete another quick survey to see what, if anything, has changed. There is also a short Q&A session for interested audience members with the director and members of the cast, so they can learn more about the process and performances.

Feedback will assist Catherine with her studies. In September 2018, she started a Masters in Applied Research in Human Communication Disorders at UCL, focusing on the relationship between attitudes towards stammering and theatre.

She explained: “While there are many studies that have found theatre can challenge and even alter audience’s views on social issues such as sexual assault and discrimination towards LGBT groups, no one has explored whether theatre has an impact on people’s thoughts about communication difficulties such as stammering.

Catherine states: “Our play is the first to formally look at this question, and we thank audiences for being part of it.”

The therapist has been involved in theatre in Oxford for three years. In 2017 she devised and ran a project for Oxford Health to develop the social communication skills of children with Autistic Spectrum Disorder through drama-based intervention.

Last year she ran a drama taster workshop for members of the public, patients and staff who are members of Oxford Health NHS Foundation Trust at the trust’s membership event Health Matters:Art in Recovery.

Helping the families I work with

“Actors are usually interested in the thoughts and feelings of others, helping us to understand the characters that we play. We’re naturally quite nosy people,” she laughed.

“That sense of empathy is something that I bring to the children and families that I work with at Oxford Health to try to understand what they are going through.

“Once you get inside the mind of a child with Autism, you can begin to find the ways to help them understand a world that feels confusing or terrifying.

“The creative skills I use in therapy and theatre often feel like they go hand-in-hand for me.

“In 2017 I ran a project in Oxford where we used Shakespeare’s The Tempest to develop and teach social skills to children with Autism. Watching them grow in confidence and find new ways to communicate was an invaluable experience. “

Unspoken is being performed nightly at 7.30pm from now until Saturday, October 26, at The Old Schoolhouse, Hertford Street, East Oxford.  Tickets are £12, concessions £10 available on the door or from www.oldfirestation.org.uk or 01865 263990.

More information about the production can be found at www.bmhprodcutions.co.uk/unspoken