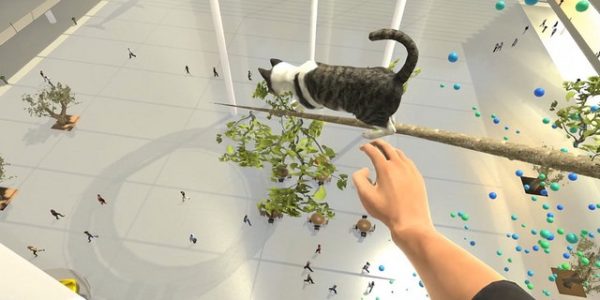 Fear of heights is a significant problem for one in five people at some point in their lives, and most never receive treatment.

Although virtual reality (VR) has been used in the past for phobias, it has always required a therapist to guide the user through the treatment.

Now a team led by Professor Daniel Freeman, an Oxford Health consultant psychiatrist and a researcher the University of Oxford’s Department of Psychiatry has developed a VR programme in which psychological therapy is delivered by a computer-generated virtual coach. Treatment is personalised, with users able to interact with the virtual coach using voice recognition technology.

These results are better than those expected with the best psychological intervention delivered face to face with a therapist.

Professor Freeman’s VR therapy, which was produced by the University of Oxford spinout Oxford VR and tested in association with the NIHR Oxford Health Biomedical Research Centre, took users wearing an HTC Vive headset to a computer-generated ten-storey office building. Guided by Nic, the virtual coach, users undertook a series of activities, which increased in difficulty the higher they went.

Professor Freeman said: “We designed the treatment to be as imaginative, entertaining, and easy to navigate as possible. So the tasks the participants were asked to complete included crossing a rickety walkway, rescuing a cat from a tree in the building’s atrium, painting a picture and playing a xylophone on the edge of a balcony, and finally riding a virtual whale around the atrium space!”

“The results are extraordinarily good. We were confident the treatment would prove effective, but the outcomes exceeded our expectations. Over three quarters of the participants receiving the VR treatments showed at least a halving of their fear of heights. Our study demonstrates that virtual reality can be an extremely powerful means to deliver psychological therapy. We know that the most effective treatments are active: patients go into the situations they find difficult and practise more helpful ways of thinking and behaving. This is often impractical in face-to-face therapy, but easily done in VR.”

He continued: “When VR is done properly, the experience triggers the same psychological and physiological reactions as real-life situations. And that means that what people learn from the VR therapy can help them in the real world.”

Users were enthusiastic about the treatment. Sarah commented: “What I’m noticing is that in day-to-day life I’m much less averse to edges, and steps, and heights, and I’m noticing in myself that when I’m doing the VR and out in the real-world I’m able to say hello to the edge instead of bracing against it and backing up. I feel as if I’m making enormous progress.”

Nico said: “It’s absolutely brilliant, honestly, I do think it’s made a huge difference. Everything I thought it was going to be, it wasn’t. I anticipated it was just going to be like a game, it was going to be something that wasn’t going to arouse my senses. I found myself even after the third floor, fourth floor, going up, feeling nervous, anxious about what’s about to happen next. It definitely pushed the limits in terms of what I thought I would be able to achieve, and then got me to go past that.”

Maurice said: “Last week, after my third session, I went up to Westgate [shopping centre]; the difference in my mental capacity to deal with heights was amazing. Previously I wouldn’t go anywhere near the edges, I was almost hanging right off, looking vertically down. The sessions I’ve had here have given me a lot to think about, and certainly with regards to my fear of heights it feels like it’s helped a lot.”

Professor Freeman commented: “The advent of consumer VR equipment means that automated treatment can potentially be made available to millions. But what’s even more exciting is the prospect of using VR to tackle serious and widespread mental health problems, such as depression, psychosis, and addictions. Rigorous testing will be vital but it feels as though we may be looking at a big part of the future of mental health treatments.”