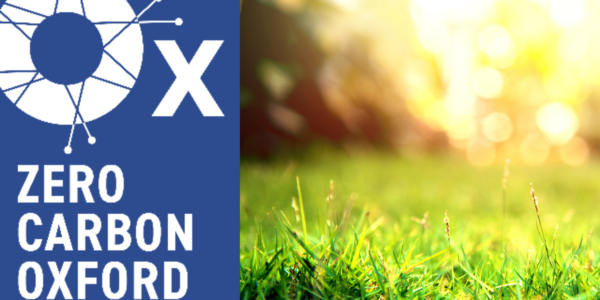 As leaders from around the world meet in Glasgow for COP26, key organisations and businesses across Oxford have issued a letter welcoming the start of the COP26 summit and highlighting the need for concentrated action from Government.

The “Letter from Oxford”, which was sent to COP26 President, Alok Sharma, welcomes the Government’s leadership on climate change, but highlights that additional commitments are required in order to unlock faster decarbonisation at a local level.

The letter has been issued by the Zero Carbon Oxford Partnership.

The letter highlights that while the Partnership has opportunities for collaborative action to reduce emissions, there is also a need for concentrated action from government to unlock progress across several areas, building on the commitments made in the Government’s Net Zero Strategy:

The ambition of Zero Carbon Oxford Partnership is to work with Government to accelerate the adoption of clean and sustainable energy in Oxford and across the UK.

What is the Zero Carbon Oxford Partnership?

In February 2021, Oxford City Council held the Zero Carbon Oxford Summit which saw leaders from major businesses and organisations across the city give their support to the ambition of achieving net zero carbon emissions as a city by 2040.

The Summit brought together leaders from both City and County Councils, both universities, both hospital trusts, major businesses including BMW, Unipart and LandSec, transport providers, schools and further education colleges, anchored institutions, and other organisations that are strategically important to achieving a net zero city by 2040.

In the summer, the partnership approved the publication of the Zero Carbon Oxford roadmap, which models a pathway to net-zero 10 whole years ahead of the UK’s Government’s legal targets.

Following the timelines identified in the science-based roadmap, it is predicted that by 2040, action will have reduced Oxford’s carbon emissions by 88% from 2018 levels.

Find out more about the Zero Carbon Oxford Partnership at www.zerocarbonoxford.com

“We welcome all efforts to address the climate emergency and we want to help the Government by offering our expertise, as well as calling on them to provide more support locally in order for us to enact the change needed to achieve net zero as quickly as possible.”

Alexandra Schneider, Director of Finance and Compliance for UK Plants Oxford, Swindon and Hams Hall, said: “Sustainability is at the heart of the BMW Group. As one of the largest employers in Oxfordshire, we’re delighted to be part of the Zero Carbon Oxford Partnership. Our global team is working across the whole lifecycle of our vehicles and this includes our manufacturing sites, to create a future that is carbon neutral and circular.”

Jeremy Long, Chair of OxLEP, said: “It’s important to inspire our business community to understand the role that they can play, and the practical steps they can take, in embracing a zero-carbon future.

“And in seeking new solutions, Oxfordshire expertise is being applied to explore the boundaries of future energy systems. For example, in nuclear fusion – led by the Culham Centre for Fusion Energy – a form of energy that offers the world an abundant and replenishable source of energy within our lifetimes.

“In addition to this, two UK energy system demonstrators – the Energy Superhub Oxford and Project LEO, an ambitious smart grid trial – are based in the county and it’s this expertise and capability that we will continue to highlight both during COP26 and beyond.”

Professor Alistair Fitt, Vice-Chancellor of Oxford Brookes University, said: “The coming together of the international community for the COP26 summit reiterates that the climate crisis is a global emergency. We have an important local role to play in achieving net-zero carbon emissions here in Oxford with our Zero Carbon Oxford Partners.

“Sustainability is at the heart of our University’s campuses and activities, from teaching to our world-leading research. We’re committed to sharing our expertise to help the city achieve its ambitious target, and I am proud that Oxford Brookes University is supporting the Zero Carbon Oxford Charter and the far-reaching ambitions of the partnership.”

Dr Nick Broughton, Oxford Health’s Chief Executive Officer said: “Oxford Health NHS Foundation Trust welcomes the opportunity to work as part of the Zero Carbon Oxford Partnership to achieve the collective aim of a zero-carbon city by 2040.   The Trust has already taken strong steps in recognising, promoting and reducing the impact on the environment and has made ‘making the best use of our resources and protecting the environment’ one of four core objectives within its new Trust Strategy (2021 – 2026) published earlier this year”.

Melanie Bryce, Oxfordshire Programme Director, SSEN, said: “Through projects such as LEO (Local Energy Oxfordshire), SSEN is able to support the Zero Carbon Oxford Partnership and develop a blueprint for collaboration to reach the net zero target for 2040. COP26 gives an opportunity for clarity of direction for policy makers, and clarity of purpose for communities and businesses to encourage investment and innovation at the local level”