The Improving Patient Experience Award offers service users, carers and their families the opportunity to recognise the outstanding care and support given to them, by a member of staff or a team, that they feel has made a real difference to their experience.

“Jackie has, several times, been a kind face on a very bad day. The support that Jackie has provided me with has been far beyond what I could have expected from any professional.”

Nursery nurse Jackie Sangan said even her nomination was completely unexpected but winning the coveted Improving Patient Experience Award left her completely speechless. A nice addition to the celebrations was that her nomination and win caused quite a storm on social media.

“People I haven’t seen for some time, even years, have been in touch,” Jackie says.

She works as nursery nurse for the Oxfordshire Perinatal Mental Health Service, supporting pregnant women and new mothers who are dealing with mental illness.

“I am just a very small cog in an amazing team,” she claims. “Our work is fantastic, really rewarding although sometimes heartbreaking, too.”

“I’m passionate about giving every baby a right chance in their life and if I can support the mum, I’m doing my bit.”

Jackie was nominated by a mother with whom she has been working with since February. Jackie is greatly moved by the nomination letter.

“Knowing that this mum was quite unwell at the time and took time and effort to write this nomination means so, so much. She did it at the time she really should have thought just about herself. But really, this award should have gone to all my colleagues. I was just at the right place at the right time.” 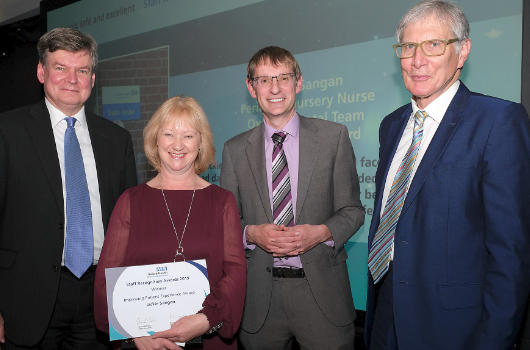 “I am just a very small cog in an amazing team. Our work is fantastic, really rewarding although sometimes heartbreaking, too.

I’m passionate about giving every baby a right chance in their life and if I can support the mum, I’m doing my bit.”

Her nomination said: “Carey treats me like me, not a patient or a case study. She provides me with hope and I now see a future in which I’m alive because of her. She is the kindest human I’ve ever met.”

Their nomination said: “The team together created a care plan for me that helped every part of my complex, long and persistent illness. I had never received or known that such care existed. It was both a privilege and also very accessible.”

Back to Roll of Honour