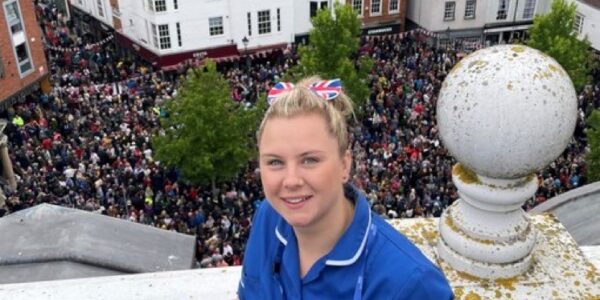 Ecstatic Frankie Pacey was thrilled to throw baked goods at her loved ones – all in honour of the Queen!

Ceremonial bun-throwing from the top of county hall in Abingdon dates back a staggering 400 plus years and is usually held to mark a royal occasion. As currant buns are lobbed from the above, crowds gather on the ground to try and catch one.

Community nurse team leader Frankie Pacey said: “I was super excited and feel honoured to have been asked to represent the NHS and to participate in the bun throwing!  Standing at the top waving down at the cheering crowds was an amazing feeling! And seeing my family, friends, colleagues, patients and their relatives below was just the icing on the cake! Although my throw wasn’t the greatest I am hoping I managed to reach some people.

“I was asked by the town council whether I would represent the NHS at the traditional Abingdon Bun Throwing event which was being held to commemorate the Queens Platinum Jubilee. I grew up in Abingdon and so I was familiar with the 500-year-old Abingdon tradition. I donned my uniform, union jack headband and union jack socks and met with the Abingdon councillors. We then took part in a procession and sung the national anthem in honour of Her Majesty the Queen before making our way to the top of the museum to commence the bun throwing!

“It was the most amazing experience and one that I will never forget! Certainly, a story to tell my children and grandchildren! What an absolute honour!”