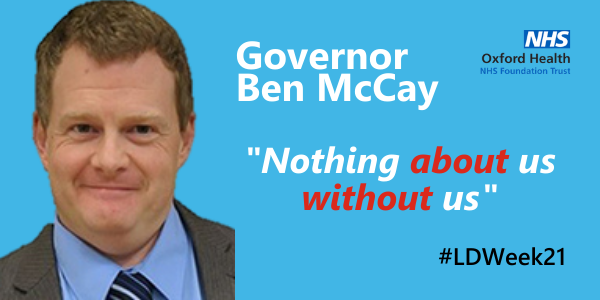 “When staff work with patients, we get better services for everyone. I like the phrase ‘nothing about us without us.’”

Learning Disability Week June 14 to 20 starts today and what better way to kick off the week than introduce Oxford Health’s new governor Ben McCay, elected in May this year to represent service users in Oxfordshire.

“I wanted to stand as a governor for Oxford Health so that people with a learning disability are represented. This has not happened before. So, I’m leading the way. I hope to make becoming a governor more accessible for people with any disability in the future.”

Ben is delighted by this new phase in his advocacy for people with learning disabilities.

“I was very excited and very surprised to get elected,” he says. “I was worried no one would vote for me but when I saw the results, I had got more votes than anyone else in my category!” he reveals.

But perhaps Ben shouldn’t be entirely surprised. Behind his standing as a candidate and eventually winning the seat, there was a lot of persistent and long-term work from the Leading Together group. This co-production group is made up of people with a learning disability and Oxford Health staff. Among other work, the group started making the Trust membership and governance more accessible and meaningful for people with a learning disability – and through that, for everyone. 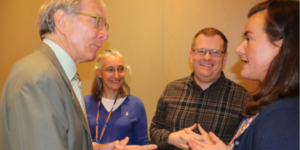 Ben attended the Council of Governors’ meeting as an observer in June 2019, accompanied by the patient experience team’s Rachel Miller and Donna MacKenzie, and was welcomed by Chair David Walker.

Already in June 2019 Ben attended a Council of Governors’ meeting in Thame. At that point he wasn’t really planning to become a governor as he had many other duties: he was an expert by experience for Oxfordshire County Council and Oxford Health, and a co-chair of trustees for My Life My Choice, a local self-advocacy charity. But he had many astute observations from that meeting:

“It was very formal. But nobody introduced themselves. Then they started talking about NEDs. In our world we don’t call people NEDs. Do you know what it stands for? Non-educated delinquent.”

As NED in the Trust stands for non-executive director, Ben’s feedback made it quite obvious that acronyms can have many different meanings.

After his ‘taster’ meeting Ben fed back that the Trust would need to produce an easy read agenda and papers well in advance of the meetings to make them easier to understand. He also suggested that meetings should have red and green cards which people could hold up if they didn’t understand something – this would take out the embarrassment of shouting out ‘I don’t understand.’

And Oxford Health listened. From June 2019 the Trust started to produce easy read agendas and papers and adopted red and green cards in meetings – until the Covid pandemic moved all meetings online. Ben and other members of the Leading Together Group have attended other meetings since then, including the Trust Annual General Meeting. Their presence has been acknowledged by the Trust Chair David Walker, and indeed, many speakers have started their presentations by saying ‘I hope I don’t get a red card!’

Leading Together members have given written feedback about their experience of each meeting, addressed to the Trust chief executive and chair. This has continued to keep accessibility high up on the agenda – literally!

Into the new role

Now Ben’s term as a governor has started in honest, with a whirlwind of meetings, an induction to the role and getting to know his fellow governors.

“It’s been exciting and interesting, and I’ve enjoyed meeting the other governors. It is nice to see that the governors are a diverse group of people,” he says.

“It’s going to be a lot of hard work, but I’ll enjoy it,” he confirms.

One of the first tasks he is planning to tackle is to produce an easy read version of the Governor’s Handbook. On the top of his new duties, Ben will continue his other work as a learning disability advocate.

“I am chair of local charity My Life My Choice, run by and for people with learning disabilities. I am also spokesperson for Learning Disability England and have written a blog on hidden disabilities, which is when you cannot see someone is disabled and this can affect how people treat us,” he says.

He is also on the co-production board at Oxfordshire County Council and will of course continue the work in the Leading Together Group.

“I think that when staff work with patients, we get better services for everyone. It is important that patients’ voices are heard at every stage of service changes, from initial plans to a new service opening. I like the phrase ‘nothing about us without us.’”

You can contact Ben and all Oxford Health governors by emailing contactyourgovernor@oxfordhealth.nhs.uk.

Become a member of Oxford Health and help shape our services like Ben and the Leading Together group – sign up here.

Or use the easy read membership form