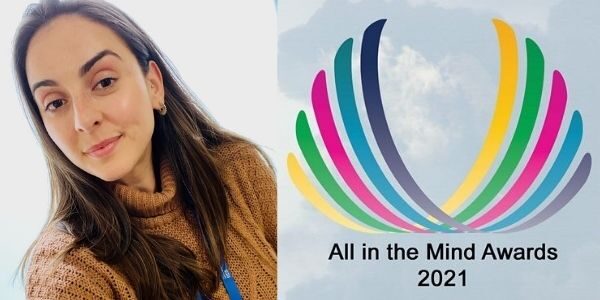 No, it wasn’t an April Fools even though the news came on April 1. That’s when Richa Barreto learned she had been selected as a finalist in BBC Radio 4 All in the Mind Awards. And what’s more, she had been nominated by a patient. Out of over 4,000 nominations Richa and her nominator are among the nine finalists and one of the three in the Professional Award category.

“Just the fact that this person nominated me is an award in itself. Regardless of the outcome, it’s a credit to the whole team,” says Richa

Richa is a mental health occupational therapist and works as a care coordinator at Oxford Health NHS Foundation Trust in the South Older Adult Community Mental Health Team, based in Abingdon. In her role she supports patients, as well as  their carers and family members, in their recovery and maintaining their wellbeing in the community.

“Our role is to see the person as a whole, using a holistic and therapeutic approach. We establish what is most important to them, their values and meaningful occupational roles. We aim to empower patients to take the lead in their recovery journeys. They are the experts,” Richa explains.

In practice she has a caseload of up to 25 patients and meets with them regularly. Even throughout the pandemic Richa and her colleagues have been seeing patients face to face.

“The initial few meetings are about getting to know one another and establishing a therapeutic relationship. Then, if appropriate, we set up goals and next steps. Before Covid I might have been supporting a client to overcome their anxiety, for instance, by going out into their local community with them, as well as using other psychosocial interventions, to enable them to build their confidence in situations they find difficult.

“Since Covid, we have had to adapt our ways of working. We see the person at home and talk about what’s going well and not so well, making sure that they feel connected and have someone to talk to. Or it could be that they have had a change of medication and my role would be to see how this is working for them,” Richa tells.

Care over many months

Richa feels quite awkward recounting her own praise but we nevertheless want to know why she was nominated!

“The patient was experiencing a severe depressive episode and I saw her every week face to face throughout the pandemic. A key part of our work was to avoid admission to hospital and help her recover in her own home.  Gradually, over a period of four to five months she began to make positive progress and is now feeling mentally in a good place, which is fantastic. The patient recalled feeling well supported: she felt there was always someone there and that if it wasn’t for the team’s input and care, she may have ended up in hospital,“ Richa says.

In quite a twist, Richa herself fell ill with Covid on the New Year’s Eve.

“I was really quite poorly; it was a lot tougher than I expected. I couldn’t get out of bed and my oxygen levels kept dropping. It took a good three to four weeks to feel better. Thankfully, I have made a full recovery,” Richa says.

When she came back to work, one of the first emails she saw was about the All in the Mind awards nomination.

“It was a huge surprise. My patient had called the team to let me know that she had put me forward because she wanted me and our team get some recognition,” Richa says.

It is clear that Richa absolutely loves her work.

“Seeing people get better and stay well is the best part of the job, but this doesn’t happen always. We work a lot with older adults who have dementia which is a progressive illness. But we can focus on supporting carers and family members who a key in ensuring a good quality of life for their loved ones. Supporting people through a mental illness can be challenging but it’s also very rewarding.

“If we can touch and support the lives of those most in need and be a beacon of light in the darkest of times then that’s an incredible thing to be able to do,” she says.

“I work with a brilliant team, all of whom are so supportive, dedicated and hardworking. It’s evident everyone really cares about what they are doing.”

“I am delighted that Richa has been nominated for the All in the Mind Award and reached the final, it’s a very proud moment for the Allied Health Professional (AHP) team at Oxford Health. It is particularly touching that the nomination came from a patient whom Richa had been supporting over many months with such compassion and care. This is a real example of the amazing work our occupational therapists do in order to help people recover and lead fulfilling, meaningful lives in the community.”

“Richa joined our team in 2019 as a newly qualified occupational therapist and completed her preceptorship with us. It quickly became clear that Richa was a dedicated and skilled clinician and she has rapidly progressed within the team. She is a real asset to the team and our patients. It is wonderful that she has been nominated for this award.”

The Radio 4 All in the Mind Awards invite people to share their experiences of brilliant mental health care and recognise the unsung heroes who helped make the difference. The Professional Award for which Richa is nominated is for:

A mental health professional whose dedication, help and support made a really significant difference to you. This could be a psychologist, psychiatrist, social worker, nurse, volunteer or other professional.”

All the finalists and their nominators will be interviewed by Claudia Hammond and broadcast on All In The Mind. This is Radio 4’s magazine programme on mental health, psychology and neuroscience which has been running for over 30 years.

The finalists will be invited to a ceremony in London in June 2021, at which the winners are announced.