The first members of the public arrived today at the Kassam Stadium in Oxford to receive their first dose of the Oxford AstraZeneca Covid-19 vaccine.

People aged 75 and over who have been offered an appointment at the centre and made their appointment via the national booking system started arriving from 8am.

After a quick sign-in process they were shown through to the main room which houses several vaccination “pods”. From there, once their turn came up, it was a simple case of sitting down in the allocated pod, rolling up their sleeves and relaxing while the trained vaccinator did their work.

Many commented at the ease and efficiency of the process, including Dan Robinson, 75 who is originally from America but has been a UK resident for 40 years and lives in Oxford. He was right at the front of the queue having made an appointment for 8am.

He was holding his post-inoculation leaflet and sticker along with details of his follow-on appointment and wanted to explain what being vaccinated meant to him. He said: “The jab went fine – it was all very well organised. There was no pain at all. 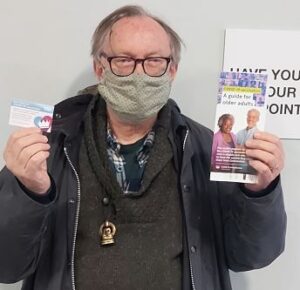 “I believe we need to get as many people as possible vaccinated as quickly as possible. I myself am in a high-risk group due to a heart condition and until now I have been very worried and very keen to get vaccinated.

“Like everyone I want to get back to normal. Covid had really affected people’s lives – especially the youngsters. It’s been sad to my three year old granddaughter not being able to play with her friends. But of course the restrictions are there for good reason and we need to keep following them.” 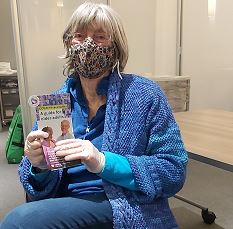 Diana with her vaccination leaflet

Dan will be back for his second dose in April as will Diana, also 75, from Summertown who said: “I’m really relieved to have my first dose.

“We have to remember that getting your jab represents a reduction in risk and you still have to follow the rules. But it does make you feel more comfortable. If it keeps people out of hospitals then it’s a very good thing.

“The restrictions have been awful but necessary. It has been hard for me but not as hard as for children and families.” 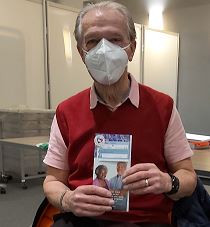 Michael Mingos, 76, arrived from Haddenham and like the others was impressed at the organisation at the Kassam and explained: “It all went perfectly. There was no pain, no problem and it was all very efficient.

“To get my first dose is a relief in a sense as it feels like I have been waiting for quite a while as the process gets to my category. So I was pleased when I got the letter from the NHS.

“I did all the booking online and it was really smooth and easy.

“At home we have been sticking to the rules and I don’t think I have even been in a supermarket for our of five months.” 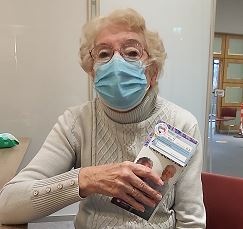 Shirley Rust, 75, from Benson, explained: “The jab went perfectly – it didn’t hurt. My husband has now had both doses at the Churchill and so we are both quite happy.”

The Kassam Stadium is one of 32 new NHS Vaccine Centres which opened last week and began delivering life-saving Covid jabs to the public from today as the health service continues to accelerate the biggest immunisation programme in its history.

It is the first large scale centre that Oxford Health has set up as lead provider for vaccination centres for the NHS in Oxfordshire, Buckinghamshire and Berkshire West.

For Oxford Health’s Covid Operations Director, Tehmeena Ajmal, today was another milestone after several weeks of painstaking preparations by a dedicated team at Oxford Health to set up patient flows, systems and the overall roll-out of the programme.

She said: “It was amazing to be here at the start of the day to see the first members of the public coming along and to watch how all the hard work done by my colleagues has resulted in such a smooth operation.

“Seeing people who had received their vaccination afterwards looking so pleased was really rewarding. I know that many of them have been waiting for this moment and are now looking forward to getting their second jab.

“It was also good to hear that the message about sticking to the rules is well understood and that the vaccination is just one of the things that will help us to get back towards normality.

“Hopefully anyone hearing what people have said today about the vaccination process will be encouraged and will be keen to get their jab at the earliest opportunity.”

Members of the public aged 75 and over have been offered an appointment at the centre from Monday, February 1 via a national booking system. They are being contacted by letter and by phone to make an appointment for their first dose of the Oxford AstraZeneca vaccine.

If they cannot or do not want to travel to the Kassam, which will open seven days a week, from 8am to 8pm people from next Monday, February 1,  for booked appointments, they can wait to be invited to be jabbed by a local GP service or hospital hub. People are reminded not to turn up to the Kassam Stadium without an appointment.