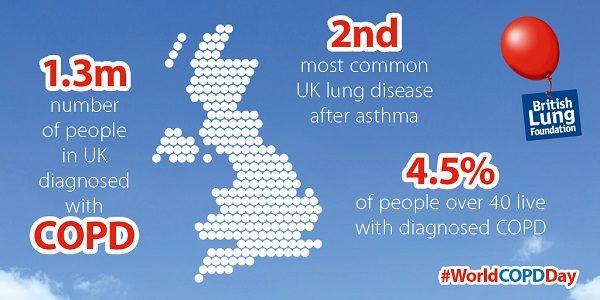 Meet our respiratory team at Cowley Centre on Wednesday, 20 November

Our respiratory team will have a stand in Cowley Centre in Oxford from 9am to 3pm. Pop in to hear how they can help those living with COPD, join a support group and meet others who have experience of this condition.

What does COPD stand for?

COPD is an umbrella term for a group of conditions which make it more difficult to empty air from the lungs. This can leave those affected struggling to breathe, making everyday tasks such as washing or getting dressed a struggle. The letters COPD stand for:

Obstructive – your airways are narrowed, so it’s harder to breathe out quickly and air gets trapped in your chest

Pulmonary – it affects your lungs

There are 1.2 million people with a diagnosis of COPD in England, and it is estimated there could be as many as two million living with the disease but don’t have a diagnosis.

COPD is often caused by smoking, but this isn’t the only risk factor. Others include exposure to second-hand smoke, air pollution, your genes and your age.

Find out more at the British Lung Foundation website