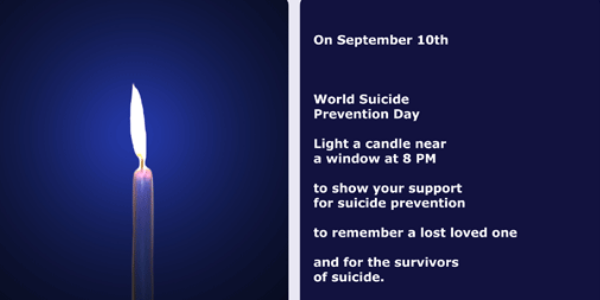 Tuesday 10 September is the World Suicide Prevention Day, and the International Association for Suicide Prevention is inviting you to light a candle near a window at 8pm to show your support for suicide prevention, to remember a lost loved one and for the survivors of suicide.

We are also inviting you to share on social. You can find the e-card in many different languages on the IASP website. Suggested hashtags are:

In Buckinghamshire the Buckinghamshire Suicide Prevention Group and Time to Change Group are running a men’s mental health campaign on the day, and also on the World Mental Health Day October 10.

They have chosen this focus because in the UK men are three times more likely to take their lives by suicide. In 2017, the rate of suicide in the UK was highest among men aged 45-49. Men may fail to recognise or act on warning signs, and may be unable or unwilling to seek help from support services.

In October and November there will be four one-day suicide first aid training courses which will teach a step-by-step approach to recognise when someone is thinking of taking their life and help them to consider their options and stay safe.

The courses are subsidised by the Buckinghamshire County Council and open to public and voluntary sector staff.

See the course info and how to book

Mental health is unique in the sense that a conversation can save a life. Buckinghamshire County Council has produced guidance It’s safe to talk about suicide.

It’s emphasises that you needn’t be an expert – just listening can help someone work through what’s going on in their mind.

It’s safe to talk about suicide