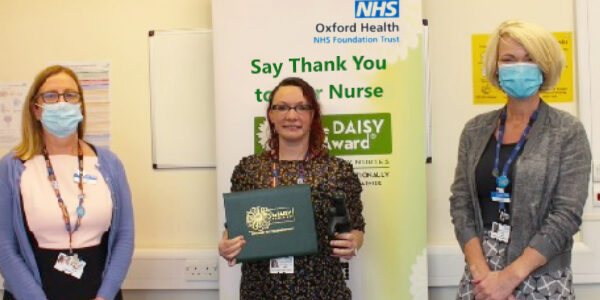 Another Oxford Health nurse has been surprised at a secret award ceremony held to celebrate their excellent contribution to patient care.

Lisa Atkin, who works in the Adult Mental Health Team in Witney didn’t realise when she went along to see someone from the team be presented with a DAISY award that she would be in the spotlight herself. She explained:

“I wasn’t expecting the award in the slightest. We knew that someone was getting an award as it had been put in our diaries but I was called down to the group room and everyone was there waiting for me.

“I’m so pleased and the things that the patient who nominated me said made me cry.

“I saw the patient who nominated me the following morning and I took coffee and cinnamon buns then to thank them. The DAISY award is a lovely way to celebrate the hard work nurses put into their jobs each day.”

Lisa is a care coordinator and has worked in the role since qualifying as a nurse in 2019. She has always worked in health and social care. Her first mental health job was in occupational therapy before she moved into nursing.

And while she is really pleased to win she is also keen to see more Oxford Health nursing colleagues be nominated. She said:

“The DAISY award programme is really lovely. I know how much it means to be nominated and look forward to seeing more nurses from across the Trust being surprised like me.”

“The fact that someone has taken the time and effort to write a nomination is really encouraging and I know, having seen the nominations, that patients really appreciate the help and support that they get from Oxford Health nurses.

“I’d like to say well done to Lisa again and encourage anyone who knows of an Oxford Health nurse that they think goes above and beyond to fill in a DAISY nomination.”

The story of DAISY

The DAISY Award was established by the family of J. Patrick Barnes who died at age 33 of ITP, an auto-immune disease. The Barnes Family were overwhelmed by the clinical skills, care and compassion of the nurses who cared for Patrick, so they created this international award as a recognition to nurses everywhere.

Each award will be the result of a nomination from a patient, family member/carer or a colleague. Nominations received will be blinded and scored by the DAISY selection committee.  Once a selection is made – eligibility will be verified with the nominee’s manager and arrangements made for the surprise award giving event.

If you have received exceptional care from an Oxford Health nurse you can find out more about how to nominate them on our dedicated DAISY page here.