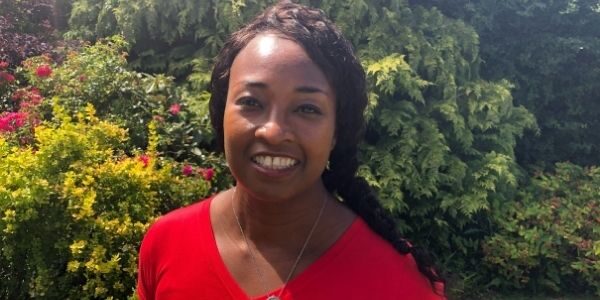 "I really want to listen to what patients and staff say and communicate to them that they are being heard."

“I am really excited to be joining Oxford Health,” says Anna Gardner who was elected in May as a public governor for Buckinghamshire to the trust’s Council of Governors.

“There are so many changes: a new medical director, new people officer. Many of the non-executive directors are new and half of the governors are new. With churn and change comes huge opportunity,” she believes.

Anna is an ex-corporate lawyer with 20 years of experience in the City and a current master’s student in counselling at the Roehampton University. But it was her voluntary work as a listener with the Cruse Bereavement Care that brought her to Oxford Health.

First, a trust board member heard her speak at a Black Lives Matter event. Following that, she was invited to speak at one of Oxford Health’s Black History Month events in October 2020. From there governor Mike Hobbs invited her to consider the position of a non-executive director.

“I looked into it, but it was just too much work. I have a family, three teenage children and I’m studying. I just didn’t have the time, so I declined,” Anna tells.

But Mike Hobbs was persistent.

“He said he didn’t want to bug me, but had I thought about becoming a governor,” Anna laughs.

“I saw that there was something I could bring to the trust with my background as a lawyer and experience of strategic oversight. The role would also help me better understand the clinical side and how services are set to provide for mental health. So, it really was a win-win situation,” she explains.

Once Anna had decided to stand as a candidate, she made the most of her network and recruited over 100 new members to the trust. Now she is particularly excited about the ambassadorial role governors play in the community.

“We governors can look at the accounts and other matters but in the end it is all about the services we provide to people. The core is to help people get well again. I really want to listen to what patients and staff say and communicate to them that they are being heard.

Her priority to start with is to get to know the trust and her fellow governors. So far this is challenging as all meetings are online and visiting locations limited because of Covid restrictions.

“My natural experience would be to be shunted into something like the audit committee, but I would like to first see where I can best use my skills and also learn most – not just go where I fit ‘naturally’,” she says.

“I haven’t got to know the other governors yet, either. Even in meetings online there are three screens of governors, so you don’t even see everyone’s faces!”

In this year’s governor election, there was a greater interest and from a more diverse group of candidates than ever before. Can Anna think why?

“I think Covid has made people evaluate what is important in their life,” she ponders.

“We have seen that the NHS is important. Doctors, nurses, cleaners, all staff faced it when everyone else was afraid. Maybe that made people realise they want to get invested and involved in community.

“Secondly, seeing what happened with Black Lives Matter made people from ethnic minorities feel that we have to step up and start taking part in the fabric of society,” she estimates.

“We still need more diversity on the board, but it’s going to the right direction,” she concludes.

Outside of studying, volunteering and public service duties Anna enjoys spending time with her very sporty family. Her teenage children play hockey and do athletics, and as a family they enjoy mountain biking and beautiful walks on the hills around Missenden. And August will bring a holiday in Barbados and later in Scotland.

You can contact Anna and all your governors by emailing contactyourgovernor@oxfordhealth.nhs.uk.

Become of member of Oxford Health

As a member you can help shape your local service and the future of Oxford Health. Membership is free and anyone aged at least 12, living and England and Wales, is welcome to join. You have no obligations as a member but there are lots of ways to get involved, including events to which you’ll get invitations straight to your inbox.