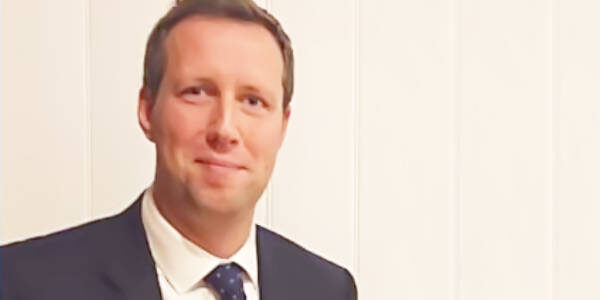 As well as governors directly elected by our trust members, Oxford Health NHS Foundation Trust has governors who are appointed by partner and stakeholder organisations that we work closely with. This month we are pleased to welcome Carl Jackson who has been appointed as a trust governor by Buckinghamshire Council.

Carl represents the Chalfont St Giles ward on Buckinghamshire Council and has lead responsibility for public health, health inequalities and the Covid response on the Council’s cabinet. That is indeed quite a brief, but Carl also has a full-time career as Chief of Staff for Mark Pritchard, Member of Parliament for The Wrekin in Shropshire. When asked what he does in his free time, Carl says:

“I’ll try and remember when I last had free time!”

Carl got into local politics “Just because I want to do something positive and productive for my community,” he says.

“I was born in Chalfont St Giles and have always called the village home – even when I went away to uni or spent time living in London. I think it’s a very special place, and I’ll preach about its various wonders to anyone.”

Carl will bring to Oxford Health the perspective of Buckinghamshire where the trust provides mental health services for people of all ages. Oxford Health is also the lead provider for the mass vaccination centres in the Buckinghamshire, Oxfordshire and Berkshire West regions, also known as the BOB Integrated Care System.

“We know that co-operation across this area is going to become much more important for all services and governance as well, so it is good to have people from all areas on the board,” Carl says.

Carl has always had an interest in healthcare and prior to his current role he was a director of a patient experience research consultancy.

“That would be where I could bring the most knowledge and experience to the trust. I don’t have a clinical background, but I do have the professional patient experience background,” Carl says. And indeed, there is a governor sub-group on Patient and Carer Experience where Carl’s input will be very welcome.

In his scant free time, Carl likes to play tennis; he is the captain of Chalfont St Giles tennis club’s men’s team. He also enjoys researching his family history. Any surprising finds?

“It’s basically all the same,” Carl laughs. “My family are from South Yorkshire, so I’ve found dozens and dozens of coal miners.

“But I did find out that I am related to one of the earliest professional footballers. Amazingly, he played for Sheffield Wednesday, which is the club I support. Not only that, he played in the same position I used to play and wore shirt number 6 which I always wear for matches,” Carl recounts.

His ancestor back four generations had an extraordinary and short life.

“I found him at age 15 on the census and he was a coal miner. Then I found him at age 25, expecting to see him still working as a miner but his occupation was recorded as ‘professional footballer’. He was dead less than 10 years later, in his early 30s, of a lung condition which probably wasn’t helped by all those years working down the mine. So it was a bit of a sad ending to his story, but he was part of history. There weren’t many professional footballers back when he was playing.”

You can contact Carl and all your governors by emailing contactyourgovernor@oxfordhealth.nhs.uk.

Become of member of Oxford Health

As a member you can help shape your local service and the future of Oxford Health. Membership is free and anyone aged at least 12, living and England and Wales, is welcome to join. You have no obligations as a member but there are lots of ways to get involved, including events to which you’ll get invitations straight to your inbox.