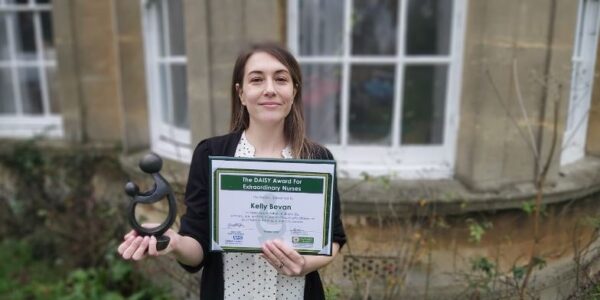 Well done to Oxford Health’s Kelly Bevan who has scooped one of the latest DAISY nursing awards.

Kelly, who works in the Neill Unit at the Warneford Hospital, was called to an unexpected meeting to hear some ‘important news’. It was only when she had been in the meeting room with colleagues listening to Chief Nurse Marie Crofts explain what the awards were about that she realised what was happening.

She explained: “It was a huge surprise. I had thought I was attending a meeting for supervision, however when Marie said that I had won the DAISY Award I was overjoyed!

Kelly, who has worked for Oxford Health since 2007 when she joined as a graduate, was nominated by a patient who she has been working closely with in her current role.

The patient described how Kelly “is a truly amazing nurse and care co-ordinator. She is so kind, calm, compassionate, and caring she has made an enormous difference to my experience of mental health services and my wellbeing.”

Marie Crofts, Oxford Health’s Chief Nurse was joined by Deputy Chief Nurse, Britta Klinck, who teamed up with Kelly’s colleagues to spring the surprise. Marie said: “We get lots of nominations for the DAISY awards each quarter and each one is special and reflects just how caring and committed our nurses are.

“There was something really special in Kelly’s nomination as it came from a patient who knew exactly how special the support was that she received and got it down in writing so beautifully.”

The DAISY Awards is an international recognition programme that honours and celebrates the skilful and compassionate care provided by nurses. The awards are an opportunity for patients and colleagues to say thank you to someone they think provides exceptional care by sharing their story of how a nurse made a difference.

As well as hearing what the patient had written, Kelly was presented with her certificate, badge and commemorative sculpture. The DAISY awards presentation package also includes a pack of special tissues, which were handy for what turned out to be an emotional moment.

Kelly said: “A key part of my role has been working with patients and caring for people with mental illness in the community. It can require persistence and perseverance but all nurses just get on with the job.

“Helping people is what we do and getting thanks for it is greatly appreciated but not expected. But it is really nice and I would urge anyone who has received great care from an Oxford Health nurse to put a nomination in.”