A photographic exhibition showcasing groundbreaking NHS research has been launched in Oxford. ‘The Body Unlocked: How Research is Changing Lives’ features life-sized photographs of people who have taken part in studies, as well as researchers at work and microscopic images of cells and bacteria. 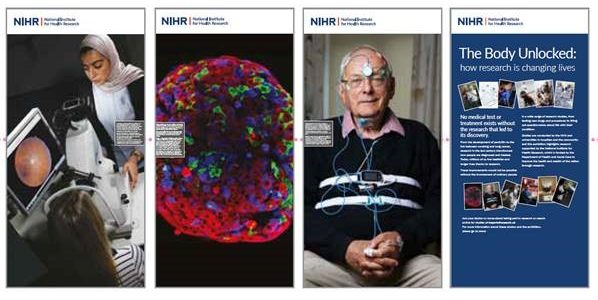 The exhibition can be seen until mid April in at Oxford’s Covered Market. The twelve powerful images depict a range of research projects from across the Thames Valley including three photographs illustrating research taking place at Oxford Health. All the studies pictured were funded by the National Institute for Health Research (NIHR). 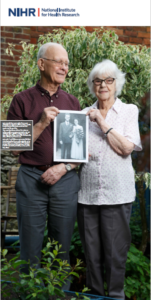 Among those featured in the exhibition are dementia study participants Barry and Enid Reeves, of Abingdon, who have been married for 70 years. The couple, both 91, volunteered for the study at Oxford Health NHS Foundation Trust after Enid was diagnosed with Alzheimer’s disease in 2016.  They were interviewed at home by researchers to find out what helps them with the condition and what stops them from living a normal life. It is hoped this will help improve NHS care. Barry said: “We’ve become closer as a consequence of her diagnosis because I have become her carer now. The study is not for our benefit particularly, we took part to help others.”

The couple are among 2,981 participants who took part in research at Oxford Health last year. Prof John Geddes, Director of Research and Development said: “While we have some reasonably effective treatments for some mental disorders, we have very little for others including dementia. Much more research is needed to discover new therapies that are precisely targeted at illness mechanisms.

“The best way to do this is by creating a vibrant partnership between patients, clinicians and scientists, creating new knowledge that gets people better quicker and helps them to avoid illness in the first place. That’s exactly what we are doing in Oxford and the exhibition illustrates this.”

Following its stay at the Covered Market, the exhibition will travel around the Thames Valley to be displayed at other venues such as museums, libraries and town halls, to be seen by as many people as possible.

Research studies are an integral part of improving treatments in the NHS, public health and social care for conditions including cancer, diabetes, dementia and psychosis. Patients are encouraged to ask their doctor or nurse about research or find search for studies they could take part in at bepartofresearch.uk. Healthy volunteers are also needed so they can be compared to those with a condition.

To find out more visit thebodyunlocked.info.