A nurse who works at an Oxford Health NHS Foundation Trust in Milton Keynes has won a very special award for her work.

Ogechi Onyeukwu, who works at Chaffron Ward, Marlborough House, Milton Keynes is the first nurse from Oxford Health to win a DAISY Award.

The DAISY Awards is an international recognition scheme that honours and celebrates the skillful and compassionate care provided by nurses and midwives each day.

Oxford Health employs more than 1,700 nurses who are eligible to be nominated and, especially given the extra challenges the pandemic has brought over the last year, it is felt that now is a good time for Oxford Health to join the DAISY family. 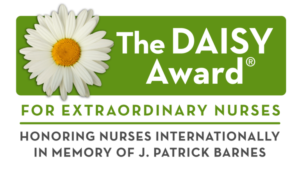 DAISY describes itself as a partnership with healthcare organisations to provide on-going recognition of the clinical skill and especially the compassion nurses provide to patients and families all year long.

If you have received exceptional care from an Oxford Health nurse you can find out more about how to nominate them on our dedicated DAISY page here.

Ogechi was nominated by a patient who said: “I would like to put Charge Nurse Ogechi forward for this award because of the amazing kind and consistent support, encouragement, and guidance she has given me.

“Ogechi has made a considerable effort with me and I cannot emphasize enough how grateful I am for someone to be so kind to help me to the extent she has and continues to do so. I think her winning this award would be great and to be recognised for her immense effort.” 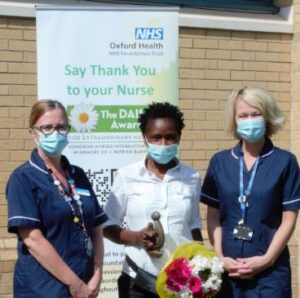 Marie Crofts, Oxford Health’s Chief nurse, said: “I am delighted to announce Ogechi as our first ever DAISY Award winner and to surprise her with the good news.

“Nurses do what they do because they are hardworking, caring and professional and the results of their efforts can be seen in the thousands of people who receive care from Oxford Health.

“The DAISY Award is an opportunity for patients to say thank you by sharing their story of how a nurse made a difference, and that is why Ogechi’s award means so much.”

Ogechi has been presented as the first DAISY honoree for the Trust with a Healers Touch Sculpture, a DAISY honoree pin and a DAISY award certificate.  The surprise award ceremony took place in her place of work, Ogechi will be recognised internationally, and her story shared on the DAISY Foundation website as well as being recognised by the Trusts DAISY ‘hall of fame’.

Ogechi graduated in 2013 and has worked for Oxford Health ever since. She said: “Honestly I did not know anything about this. I was asked to go and pick up some stuff from the shop and I saw the chief nurse and everyone waiting for me. 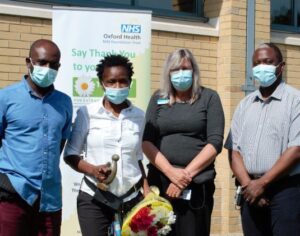 It was a shock!

“I didn’t see it coming and don’t think I do anything special in my work to be honest. It’s amazing it’s great and I can’t wait to go home and tell my family and show off the award.

“I work as a team leader as a charge nurse on an eight bed rehab ward. As a team leader I guide my team and sometimes work on the floor with the patients.

“I feel so satisfied and fulfilled and I think that DAISY is a very good initiative. If anyone wants to thank their nurse or a nursing colleague then I’d suggest that they nominate them.”

The Story of DAISY

The DAISY Award was established by the family of J. Patrick Barnes who died at age 33 of ITP, an auto-immune disease. The Barnes Family were overwhelmed by the clinical skills, care and compassion of the nurses who cared for Patrick, so they created this international award as a recognition to nurses everywhere.

Each award will be the result of a nomination from a patient, family member/carer or a colleague. Nominations received will be blinded and scored by the DAISY selection committee.  Once a selection is made – eligibility will be verified with the nominee’s manager and arrangements made for the surprise award giving event.