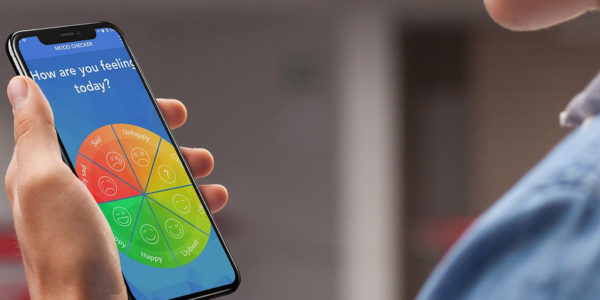 An innovative app developed by our Head of Psychological Therapies, Paul Stallard, will form a key part of a doctors medical kit in prescribing evidence-based solutions to young patients facing  severe mental health challenges, thanks to its inclusion in a new national NHS Apps Library.

Announced to coincide with mental health awareness week, the new apps library is a joint project between NHS Digital and NHS England to provide physicians a single point of access to new technical solutions that can help patients. It is due to launch fully this autumn.

The BlueIce app developed by Paul Stallard (who is also a Professor of Child and Family Mental Health at the University of Bath) is a prescribed app designed to help young people manage urges to self-harm.

The app consists of three parts: mood monitoring, mood lifting and routing to emergency numbers. Young people can use the app to monitor their mood each day, recording how they are feeling each day. If their mood is low, they are automatically routed to the mood-lifting section of the app.

This section contains eight different evidence-based ideas that can help young people feel better and manage their urges to self-harm, personalised with feel-good music, a contact list of close friends and a photo library of good times.

At the end of this section, users are asked to rate their mood again. If there is no change or their feelings have worsened, they are routed through a series of questions and led to a section with emergency numbers to call – including ChildLine, 111, and a nominated friend.

Paul Stallard said: “The idea for BlueIce emerged from my work in child and adolescent mental health services. Many of the young people I was working with were self-harming but nearly all had their mobile phone close by.  Our young people’s participation group at Oxford Health NHS Foundation Trust thought that a smartphone app could be a way of helping at times of distress and with their input we produced BlueIce.

“BlueIce is a prescribed app and is used alongside an intervention with a child and adolescent worker. It helps the young person to monitor and manage their unpleasant emotions and to find alternative ways of coping. Feedback to date from young users has been overwhelmingly positive, and we’re excited to see this rolled out as part of the new NHS Apps Library.”

Analysing the impact of BlueIce at 12 weeks, Professor Stallard and the research team involved found that three quarters of the young people assessed had either stopped or reduced their self-harming.

‘I’ve found it really helpful because I’ve tried using other apps but they only really cover like one aspect of what BlueIce offers…having an app where there’s everything that you need like a little tool kit I think that’s really helpful.’

Named to be both discreet and also not to mention self-harm directly, it refers to ‘Blue’ – describing a low mood – and ‘Ice’ – In Case of Emergency.

The new NHS library contains apps that have gone through both clinical and technical reviews.  There were over a quarter of a million visits in the last year and more than half of those were from mobile phones.

Hazel Jones, Programme Director for Apps and Wearables at NHS Digital explained: “The NHS Apps Library holds over 40 apps to help people take control of their own health and care, tackling issues from chronic obstructive pulmonary disease to self-harm.

“These days, we consume our information online in ever-increasing amounts and our smartphones sit right at the heart of that.  If we wanted to give millions of people the tools to take control of their own health that was what we had to tap into.”