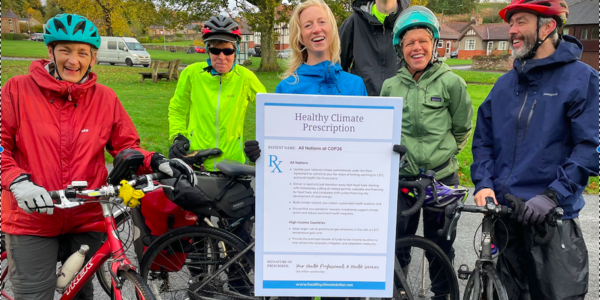 Parents and guardians are being urged to support young people who may be experiencing anxiety due to their concern about climate change, research has revealed.

Speaking during Children’s Mental Health Week, Dr Catriona Mellor, a child and adolescent psychiatrist with Oxford Health NHS Foundation Trust, says it is important that adults show worried children and young people that they understand the seriousness of the situation.

She said: The best way to show that is remembering that we are role models and we build their confidence by taking environmental actions.  Spending time outdoors in nature can improve the mental and physical wellbeing of the whole family while showing concern for the planet.”

As a co-author of a major international study around anxiety about the climate crisis amongst young people spanning ten countries – including 1,000 adolescents from the UK – Dr Mellor is well-placed to highlight the impact.

Although the survey revealed higher climate anxiety amongst young people in developing countries likely to be hardest hit by the impact of climate change, some 71 per cent of UK adolescents reported being at least moderately concerned. Around 40 per cent were ‘extremely’ or ‘very’ worried – and 28 per cent felt it had an impact on their ability to go about their daily lives.

Dr Mellor says: “Climate anxiety is distressing and upsetting but it is also rational. It is not a mental illness.  Anxiety alerts us to danger and normally that means we would find potential solutions. However, faced with such a massive global crisis, such feelings can become overwhelming.

“We’re not looking for a cure for climate anxiety. Instead, we should all recognise that concern is a reasonable response.  Spending time in nature is good for our physical and mental health and is a great way for families to spend quality time together.”

To mark Children’s Mental Health Week Dr Mellor has written a short piece with advice for parents and young people.

She said: “I was thinking about these practical tips in October when I joined 70 other pediatric healthcare providers cycling 540 miles from London to COP26 (the UN climate talks) in Glasgow. As well as delivering a strong message to world leaders, we stopped at hospitals along the way to raise awareness about how climate and air pollution really harm children’s health.

“While other clinicians from acute hospitals on the ride were, rightly, focusing on problems like the toxic air around hospitals where children are treated for life-threatening conditions, I wanted to ensure that the emotional aspects of climate change are not forgotten and also to reassure children and young people that they are not alone in coping with it.”

Dr Mellor has written the Royal College of Psychiatrists’ advice for parents and carers on ‘eco-distress’ amongst young people. It is intended to help parents, carers, teachers and others who support children and young people understand what eco-distress is and how to recognise if it is affecting their child. It also includes practical tips.

It is important, Dr Mellor says, that young people are not left to feel a sense of despair or that they must take on an overwhelming burden.

“We need to tell young people that our generation is listening to them, that we can hear what they are saying and we understand the injustice.

“Facing the feelings is the way to face the issue. Being grounded in the reality is to recognise how bad it can feel but that can get to the point where it is overwhelming. As individuals, families and communities we need to get the balance right in terms of self-care and ‘doing our bit’. It can be really beneficial to our mental health to be part of taking collective action but that does not mean we are responsible for averting the calamity.”

Dr Mellor cautioned that some young people might require professional help if their feelings of despair about the future of the planet are overwhelming. Parents should speak to their GP if they are worried that their child is struggling with concern about the climate crisis. Young people in such a situation could also talk to a trusted teacher or their school nurse.