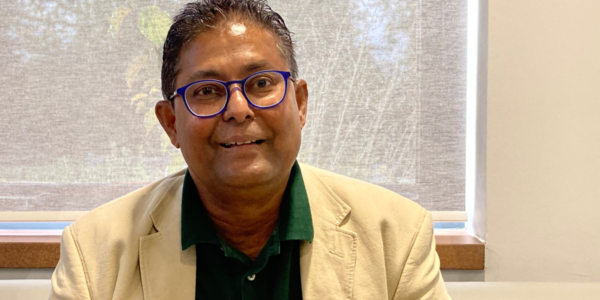 After a varied career of nearly 50 years in the NHS and a string of qualifications to his name, nurse Bala Moddia is finally planning to retire for good. Unless, of course, he carries on acting as a mentor for the younger generation, a role he has performed for decades now along his other assignments.

Bala grew up in Malaysia and was inspired to become a nurse seeing his mother care for people of all ages in their village.

“She was a very caring person and lots of people came to her with all kinds of ailments. She cared for them using traditional South Indian medicine which she had learned from her father. She never charged anyone. It was embedded in me to look for a profession doing something like what she was doing.

“So, I applied to the Windsor School of Nursing – just by correspondence. In those days there were no interviews. And in May 1975 I arrived in Windsor and started my nursing career at King Edward the VII Hospital and Wexham Park Hospital in Slough,” Bala tells. 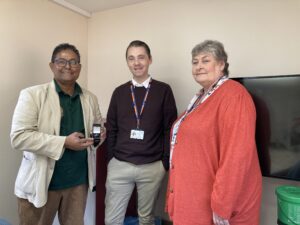 And what a career it has been! Along the years, Bala has qualified in general nursing as well as mental health and learning disability nursing, done a master’s degree in Medical Science and gained a doctorate specialising in epilepsy. He has worked across a great range of disciplines – from A&E to eating disorders – but most of all with people with a learning disability.

“I was working in orthopaedics when I had a patient with Downs Syndrome, and she was just so lovely. Working with her really was a trigger for me to study learning disability nursing,” Bala says.

It is also how he ended up in Oxford:

“This was the best place to specialise in learning disabilities,” he says.

Bala then worked as a senior community nurse for learning disabilities in the north of the county, covering Kidlington, Banbury and Bicester.

“I absolutely loved my job. I was able to use all my three disciplines – general, mental health and learning disability nursing – and really provide comprehensive, holistic care to service users,” he says.

Closing the Manor Hospital in Bucks

In 2000, whilst pursuing his doctorate research, Bala was about to make a career move to become a lecturer in the Hertfordshire University.

“At the same time, I was head-hunted to work with a team to close the Manor House Hospital in Aylesbury. I was torn between academia and the NHS – and I chose to stay in the NHS.”

The closure of the hospital – a site where the Whiteleaf Centre was built – is quite a landmark project in Bala’s career and in the history of how we look after people with a learning disability. The hospital was an old-style institution, and its closure followed in line with the Community Care Act 1990 which required that care for people with a learning disability should be provided in the community, in smaller units and supported group homes under Social Care.

“It was interesting job: we had to review every one of the 94 patients; their medication, their needs, and train GPs and staff in their new homes to look after them. The last two patients were moved to the community in 2006,” Bala recalls.

It was then that he got a letter, to his great surprise, offering him the opportunity to retire.

“It turned out that as a Registered Mental Health Officer, I was allowed to retire at 55. And at the same time, I got badly ill with pneumonia; I almost died. So that was a bit of a wake-up call,” Bala tells.

“I decided to enjoy my retirement. But that lasted about six months – I got bored!” Bala laughs.

He joined NHS Professionals which preceded the Trust’s Staff Bank and has worked as a flexible worker in the role of advanced practitioner ever since.

Career a tribute to mother

Listening to Bala, it becomes clear that thriving to learn and making a difference in people’s lives have been central to all his life and career. Even in his free time – apart from spending time with his family – he does charity work and acts as McKenzie friend in family courts, assisting people who may not speak English. So, what is that drives him?

“I came to this profession by default, and I have enjoyed every bit of it. I’ve saved lives at the A&E and changed lives for people with a learning disability and epilepsy; I still continue to raise the awareness of seizure disorders (epilepsy) in our Trust and have acted as an honourable mentor to many undergraduates over the years, whilst working as a flexible worker, and helped undergraduates with their assignments and their dissertations,” Bala says.

“And it’s all a tribute to my late mother. My house is named after her – her name was Mother Eye; Amma Kanu in our language. Sadly, she passed away at the JR Hospital when she came to visit me in 1988. She is buried in Oxfordshire, and so I am still close to her.”

Oxfordshire parents urged to get their children protected from flu

Board of Directors’ meeting, Wednesday, Nov 30 @9am