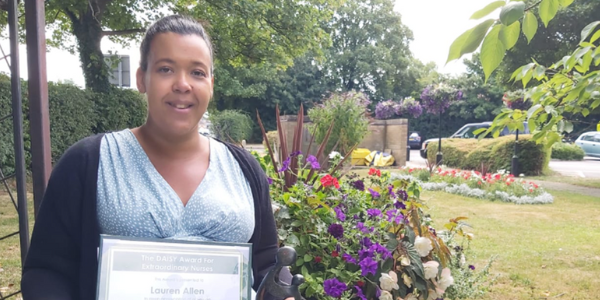 DAISY win for ‘one in a million’ health visitor Lauren

A simple half-day on the office before going on maternity leave seemed straightforward for Lauren Allen.

But when she was invited outside into the grounds by her colleagues at Kidlington Health Centre she was in for a surprise as the DAISY Award team was waiting for her to tell her that she was the latest winner.

The DAISY Awards is an international recognition programme that honours and celebrates the skilful and compassionate care provided by nurses. The awards is an opportunity for patients and colleagues to say thank you to someone they think provides exceptional care by sharing their story of how a nurse made a difference.

Lauren, who has worked as a health visitor for five years, was nominated by a mother she had worked with who wrote: “Lauren Allen is a one-in-a-million health care worker.  She has gone over and beyond to help and support my little girl.

“Lauren has restored my faith in professionals. I have had a tricky past and previous experience has not been positive.”

Lauren was presented with her award by Claire Forrest, Lead Nurse Older Adult Mental Health, who set the DAISY Awards up at Oxford Health, and Carole Jones, Operational Manager Health Visiting 0-5s, who read out the nomination.

Claire said: “It was really lovely to see Lauren come outside with her colleagues and see it dawn on her why everyone was there.

“We had the presentation outside as there wasn’t space in the building, but the weather and surroundings were perfect.

“The DAISY Awards are really special because it shows that someone has made such an impression that a patient has taken the time to site down and write a nomination.”

As well as hearing what the patient had written, Lauren was presented with her certificate, badge and commemorative sculpture. The DAISY awards presentation package also includes a pack of special tissues, which were handy for what turned out to be an emotional moment.

Lauren explained: “It was a whirlwind – I’m very shocked. I had no idea this was going to happen!

“The job is challenging but it’s the best thing I’ve ever done. Before this I was a paediatric nurse which was ward based.

“I would definitely encourage people to nominate their nurses – it’s great for people to get the recognition.”