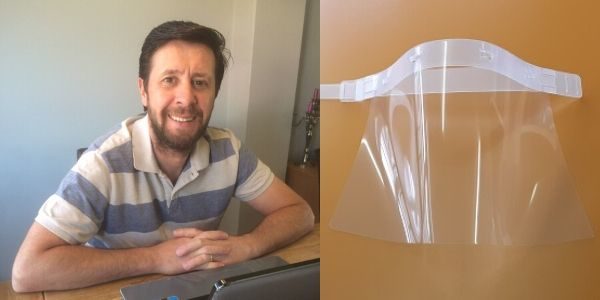 Contributing to the community since 1660

Faculty team leader John Bishop from the Henry Box school in Witney was a busy man last week: he made and assembled some 90 face shields for local NHS organisations and donated 50 of them to the Witney Community Hospital.

“The idea came when I was listening to the radio and it was clear that agencies were running short of PPE. I also learnt about a volunteer organisation called 3DCrowd, who are inviting the industry, schools and private people to make face shields,” John explained.

He spoke to some other teachers and decided to put the school’s laser cutter and spare stock of plastics to a good use for the community. With the tools, materials and support from 3DCrowd’s ready-made designs, the task wasn’t even too onerous.

John donated some of the stock to Windrush Health Centre, Medical Centre Pharmacy in Woodstock and Nuffield Medical Centre in Witney, but he also wanted some to go specifically to Witney Community Hospital.

“I and my children have used the MIU there and we have pupils whose parents work at the Witney Community Hospital,” he says. Supporting health care workers is close to his heart in other ways too: his daughter works at the Wallingford Community Hospital.

“We realised how serious it is and how much training goes into helping staff deal with this emergency,” he says. Wallingford is next on his list to receive a donation of face shileds,

The Henry Box School has a long and impressive heritage dating back to 1660 when Henry Box provided his native town with an endowed grammar school, with boarding facilities, for a maximum of 100 boys. Now it is a mixed comprehensive school of some 1,100 pupils.

“We a normal, nice school,” says John rather modestly. “We have a good relationship with the community, and we know that parents of some of our students need these shields.”

Lucy Wells, head of service for Community Services, gives her thanks to John and the school: “We are so pleased to receive this donation from you. All these gifts help our staff and ultimately our patients to stay safe. It is so thoughtful of you to think of us in these unusual times. Many thanks!”