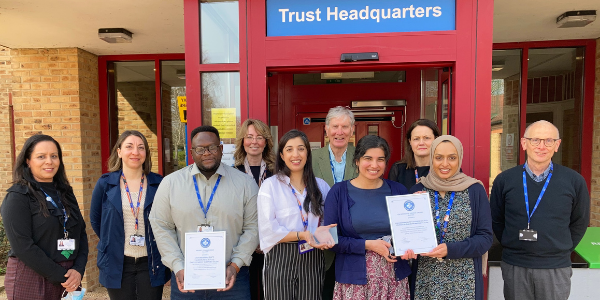 Oxford Health’s TalkingSpace Plus IAPT service and especially their work reaching out to diverse communities was celebrated when two teams from the service were recognised in the Exceptional People Awards for March. The Outreach (BAME) Workstream Team won the March team award while the service’s Employment Support Team became highly commended.

The awards ceremony at the Trust HQ at Littlemore was attended by Trust Chair David Walker, Director of Corporate Affairs Kerry Rogers and Lead Governor Mike Hobbs as well as representatives from both teams.

The event was opened by David Walker, who noted the importance of the awards for not only recognising our staff but also conveying the Trust’s work to the wider population.

“I know we do some fantastic work and help people in ways that are immeasurable – but it is not always easy to see. When the public see a hospital, they know what it is for, but our work is less obvious. It takes place in the community; we often engage with people in a longer term. The work we do is tremendously important, and these awards shine a light on it.”

Reaching out to the community 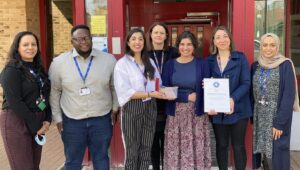 David then handed over to Lead Governor Mike Hobbs who explained the governors’ role in the awards process.

“We are elected by the members of the Trust – patients, the public, carers and staff – and as such bring their perspective, also these awards,” he said, and then read out the winning nomination.

The Outreach (BAME) team has been doing exactly what IAPT stands for – improving access to psychological therapies – in their case for people who are under-represented among those who access the therapies.

“Every member of the team has worked incredibly hard with dedication and passion to increase access to the service for people from communities and ethnicities that are under-represented relative to the local population.”

Their work has seen a consistent increase in referrals and the team is continuing to develop community links. Team’s nominator Sharyn Hyde was unable to attend the ceremony but emailed her greetings:

“I just wanted to say a huge thank you to everyone in the workstream – you all do fantastic work. What you do in the workstream is really making a measurable difference, and I’m glad that it has been recognised at Trust level. Congratulations!” 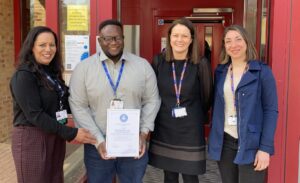 The Employment Support Team have helped over 12,000 patients to gain, retain or remain in employment. And it’s been noticed: Department for Work and Pensions (DWP) have ranked TalkingSpace Plus one of the top performing employment services in IAPT sites nationally.

The team are fully integrated with the clinical teams to make sure patient’s employment supports their recovery. Senior Employment Advisor Ismail Chando explained:

“Our focus is on mental health recovery. We don’t hold people but empower them to move on, and if there are blips – like there are in everyone’s life! – we support them.”

Ismail added that at the same time the team is reducing the stigma attached to mental health issues and breaking down barriers to seek help.

The two teams were then presented with their certificates and prizes with a photo call in the sun outside. Both teams received a signed certificates and winners receive an engraved glass trophy plus a £100 gift voucher to treat themselves.

Every month our judges choose the winner as well as two highly commended. The second highly commended team for March is the Parent-Infant Perinatal Service IPPS. We will share their story  in the coming days. 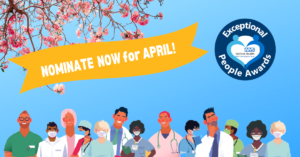 Since the relaunch of Exceptional People Awards in September 2021, we have received over 150 nominations – thank you! The fantastic work our people and teams do is being noticed in the local media and by the wider population in our communities.

However, nominations are welcome at any time, so if you miss a certain month’s deadline, your submission will simply roll on to the following month.