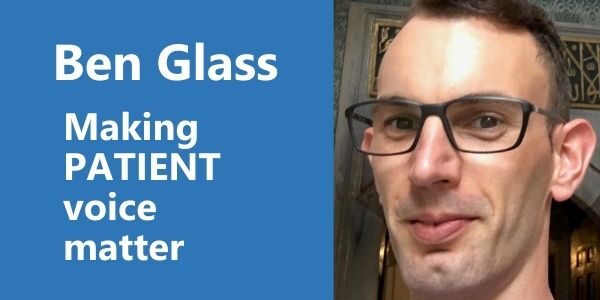 "We need a plurality of voices, and it is satisfying to be able to achieve changes through a democratic process"

In Buckinghamshire, Oxford Health provides mental health services to all ages. Ben wanted to give a voice to people he felt have been under-represented in or excluded from conversations about inequality and discrimination.

“I’m talking about people with severe and enduring mental health conditions or a learning disability or who are on the autistic spectrum. Even in patient experience or co-production projects the work is often done by same kind of people, people from professional backgrounds. There seems to be an exclusion of those with long term illness or disability,” he notes.

“I really want to open up these avenues to people without a professional background and encourage them to take part. We need the plurality of voices from that group of patients to be heard,” he says.
“What I wanted to do as a governor was: one, get them a better deal, and two, give them greater voice.”

From the start Ben was keen to get increase patient and service user representation in the Council of Governors.

“We have 36 governors [28 elected and 8 appointed] and only four of those were for people who use the services. To me that was an obvious failure,” he says.

Ben feels he and other patient governors have been able to improve democratic involvement for people who access services: Oxford Health is doubling the number of service user governors. This required a change in the Trust constitution and of course the due process of discussions and collective decision making.

“It is satisfying to be able to achieve changes through a democratic process,” says Ben.

“At every stage of the process the Council voted, and it was satisfying to win people over to empowering service users.”

He stresses though that he doesn’t see the patient governor position as being an adversary of Oxford Health staff, but instead points out the importance of supporting people who have accessed Oxford Health services to have as full a role as possible within the leadership of the Trust.

“It is just useful to have governors who have direct experience of longstanding disabilities and inequalities, and governors and staff have been very supportive of this,” he says.

Apart from this big win, what else has Ben gained as a governor?

“When I started, I came in all guns blazing!” he laughs.
“Being a governor has provided opportunities to develop my skills and confidence. My IT skills have improved, and I’ve learned a lot about the NHS and the health and social care system,” he says.

“At times I’ve felt I’ve needed to challenge attitudes towards people who use mental health services, as well as those don’t have a professional background,” he reflects.
“But that’s part of the role; to challenge those attitudes. And I like to be positive. I am very poorly organised but I am very good at not being pushed aside and being firm.”

Nominations for Oxford Health Council of Governors elections open on March 25. Have you been inspired by Ben’s story? We have 18 seats up for election and there are seven vacancies for people who use our services.

See here how to put yourself forward

In order to be able to vote in this year’s election in May, you must be a member of our Trust by April 13.