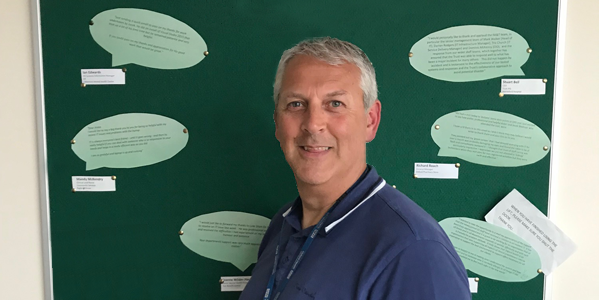 An IT support analyst with the trust since 2011, Richard is known for consistently going above and beyond what is expected of him.

It was a hot, sunny day when Richard Ashton learned he had won the trust’s Exceptional People Award for June – the perfect way to kick off summer.

An IT support analyst with the trust since 2011, Richard is known for consistently going above and beyond what is expected of him in an often-challenging role and always remaining cheerful, supporting others with a smile on his face.

Involved in an array of projects across the trust including the recent office move of the Staffing Solutions team, Richard has earned a glowing reputation among colleagues and across the teams he’s helped, having received several nominations for this award.

Tracy Prosper, IT project manager, said: “He is always striving for the best and shows the highest level of commitment to everything he does. Richard really cares about the service and support that he provides and is a highly valued member of the IM&T team. He thoroughly deserves to be recognised for the work he does.”

Richard’s IT project team colleagues said: “Staff particularly comment on how flexible and helpful [Richard] is, and how they all trust that when he is involved in a project they know he will be thorough and ensure that everything is in place before he leaves site”.

When he learned that he had been selected as a recipient of the monthly award, Richard was shocked but humble.

He said: “I’m honoured to win this award as I’ve always viewed this as just doing my job: getting out and about to help our teams.”

Richard will receive a certificate and our thanks for his valued service to the trust and patients.

Every month we recognise and reward a team or staff member that has made a real difference to the trust, our people and our patients. Nominations are welcome from staff, service users, patients, or friends and family of service users and patients. If you would like to nominate someone exceptional you can download a form here.