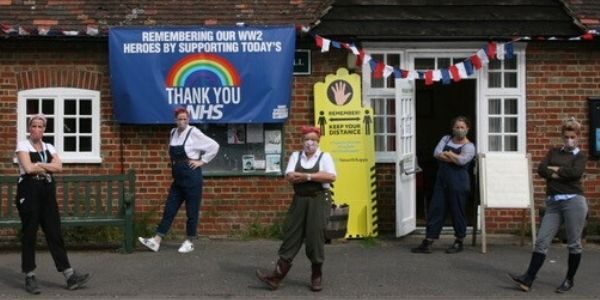 Nurses, physiotherapists, housekeepers and other staff at Wallingford and Abingdon Community Hospitals had a wonderful surprise on International Nurses Day (Tuesday May 12) when the wards received hundreds of boxes, full of practical and uplifting goodies. This was the work of people from Long Wittenham, a village of some 300 houses in South Oxfordshire.

The idea of supporting local community hospitals came to Emma Newman, a resident in Long Wittenham, after she kept seeing pictures of frontline staff with faces red from wearing masks and hands chafed from constant washing.

“I realised that many NHS staff had moved to new roles, out of their comfort zone, to support hospitals in the pandemic, and I wondered if we could do something quickly to help, something practical like providing hand cream, shower gel and laundry tablets,” she says. 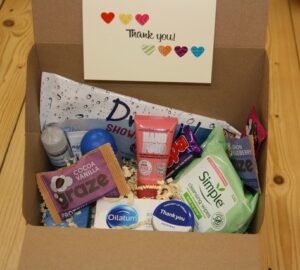 A box of goodies with a handmade card from the village.

She found out on the internet about the need for care packs and spoke to Oxford Health Charity as well as some people in the village, and from there her idea just flew.

“In 24 hours we went from a vision to a team with a mission!” she laughs.

Their small team combined their experience in project management and public relations, set up a Local NHS Heroes email address and an Amazon wishlist and ramped up publicity for their initiative. They tied their campaign to the VE day with a slogan: “Remembering our WW2 heroes by supporting today’s.”

The campaign drew enormous support from local people and businesses in the three weeks it was rolling.

“Local printers and packaging companies provided our banners, flyers, social distancing signs and packaging for free. Waitrose donated a trolley full of goodies and when I went to pick it up and told them more about the idea they told me: ‘Go and spend another £150 on us!’” Emma recounts.

“Villagers who could bake, made cakes, brownies and flapjacks, people who could sew, made face masks and head bands. Local business The Big Small Shop created a webpage so that their customers could donate items through them, while also supporting local suppliers, who in turn donated personalised drinking straws, coffee, gin, beer and even meat packs!”

The weeks of campaigning and collecting culminated on the Sunday after the VE Day.

“As a village we had planned big celebrations for VE day, but since it all had to be cancelled, we decided to set up the village hall as an assembly point for the care packs instead. Over 100 people came through the doors,” Emma says. While some of the team received items, others drove around collecting donations, which were then wiped down and packed into the boxes. 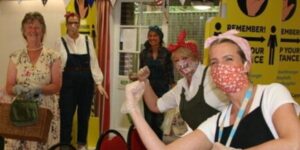 Wittenham ‘troops’ were jubilant on the day of boxing care packs for the local NHS heroes.

Photos from the day are a testimony to the jubilant mood on the day.

“By 5pm we had made 335 individual packs,” Emma says. They included items such as hand cream, lip balm, shower gel, moisturiser and treats, and every single one had a handmade card from the village.

On International Nurses Day, Tuesday, May 12, the Long Wittenham team delivered 150 packs to Abingdon, 75 to Wallingford and 100 to the South Central Ambulance Service (SCAS). They also provided boxes filled with laundry tablets, tea, coffee and hundreds of portions of homemade bakes. In addition, they were able to donate some 500 items to Oxford Health Charity to distribute to other community teams.

“We also assembled boxes for our village postmen, refuse collectors and milkman who faithfully keep serving our village, and gave a box of food to the foodbank,” Emma says.

We have to ask: what’s the secret behind such a community spirit?

“Long Wittenham is an amazing village,” says Emma. “We have about 300 houses, and huge range of ages, right from people who have lived here all their life to young families. When we organise events, people really enjoy getting involved.”

Emma and her family – husband, Sean and children Georgie, 16, and Lewis, 13, have lived in the village for some ten years.

“When we moved here, I felt like I was back to university – there were so many invitations to go out!” she laughs. By profession she works in pharmaceutical market research.

“A project I was working on got stalled, so I thought: ‘I’ll park that for the moment’ – and that’s how Local NHS Heroes got going.” 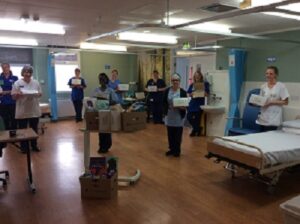 “This has lifted staff’s wellbeing so much. To receive something like this on Nurses Day is so very humbling. Residents of Long Wittenham and surrounding villages had donated everything and wrote us really lovely cards. ‘Thank you’ seem such small words for such a generous gift.”