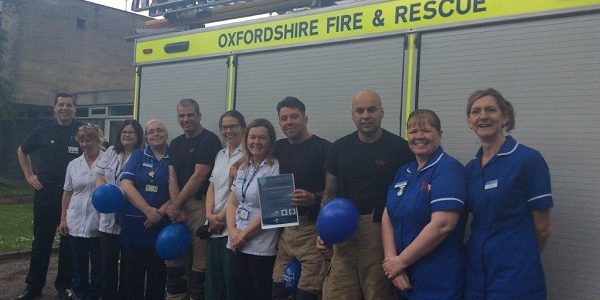 Staff at Oxford Health NHS Foundation Trust went head to head with the Witney fire service  (both pictured) on 20th May, as part of the ‘Turning Witney Blue’ initiative to celebrate Dementia Awareness Week (14th-20th June).

The initiative was led by by retirement community Richmond Villages, and aimed to make Witney a more dementia-friendly community. Local businesses also got involved, and the Witney Town hall was festooned in blue balloons to mark the day.

As an extra challenge, the fire service also held blue balloons under their arms during the tug of war, with points lost for any balloons popped!

Despite the added difficulty, the fire service won the game just in time for the sun to come out.

The Windrush Scouts from Witney Buttercross Scout Group, raising money for Dementia Awareness Week, cheered on both teams and also  took part in a second game of tug of war against the nurses.

The activities formed part of the Alzheimer’s Society’s Dementia Friendly Communities programme, which encourages communities to sign up and work towards becoming dementia-friendly. This focuses on improving inclusion and quality of life for people with dementia in a number of ways.