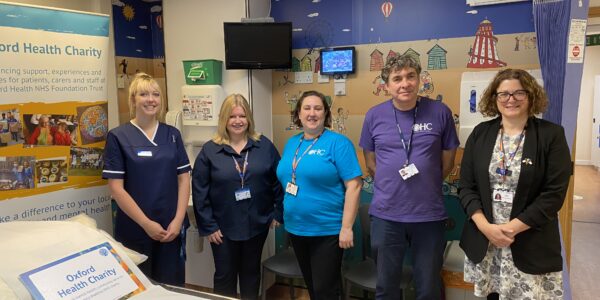 What a result for our young MIU patients!

With puffins, a helter-skelter, whales and a lighthouse, the children’s waiting area at Abingdon’s Minor Injuries Unit looks more like a day at the beach — thanks to Oxford Health Charity.

This bright and cheerful new facility was recently opened, by Chief Nurse Marie Crofts who hailed the area a fabulous success. “It’s so much better for our young patients and such a great example of the value that teamwork and what our wonderful charity can achieve.”

A fun mural by local artist Tom Cross, who worked alongside staff at the unit to co-design a bespoke seaside scene, features a beach with changing huts, fish and starfish swimming in the sea, while the town hall has been transformed into a sandcastle.

To honour the association with the area’s military links Chinook helicopters are depicted. There are even red kites flying through the sky – a common site in Oxfordshire skies. New toys have also been purchased, and, in keeping with the seaside theme, there is a captain’s wheel and a seaplane.

Rachel Caira, Clinical Lead in the Minor Injuries Unit said: “During the pandemic we had to significantly simplify our children’s waiting area due to Infection Control and it became obvious it was tired and dated. We put in a bid for support from Oxford Health Charity to create a new safe, fun and interactive environment. “We have managed to design a bespoke mural to cover the walls with objects specific to Abingdon and the surrounding areas. “We have also brought new toys for the children’s waiting area as well as a safer flooring for our younger visitors to play on.

“Children have been completely blown away and reluctant to come into the treatment area as they have been having so much fun in the waiting area! We have also had lots of lovely compliments surrounding the diversity depicted in the mural as well as spotting lots of local landmarks.

“We would like to say a huge thank you to Oxford Health Charity, as without their support we wouldn’t have been able to make this transformation.

“This project has allowed staff to use the murals during their consultations to assess cognitive ability. The children’s waiting area has also created a calming and inviting environment which puts patients at ease before they have even walked through the door and then carries on into the children’s bay creating a story.”

Julie Pink, Head of Charity and Involvement at Oxford Health said: “We are delighted to have been able to fund the interactive artwork for the Children’s area in the Minor Injuries Unit. Everything has been chosen to help to calm and soothe children as they wait to be seen and everyone is really thrilled with it. It has been wonderful to see the transformation of the area and for the staff to see the finished result as they all gave ideas for what could be included so it feels very personal for them too.”

Christine Hewitt, Head of First Contact and Primary Care said: “The new children’s play area is a huge success, Rachel and the team have worked hard to move this forward, and I am so pleased that it has turned out so well. Everyone worked closely with the artist to create a mural that is inclusive for all. We recognize that visiting hospital with a child that is unwell or injured is very stressful so having visual distractions really helps to soothe and comfort them which helps manage the worry for the parents.”

Angela Conlan, Co-ordiator for Oxford Health Arts Partnership commented: “The artwork has brightened up the unit and created a space that children and their carers are already making good use of. Projects like this are linked to the growing evidence that visual arts in hospital waiting areas reduces anxiety and stress All Party Parliamentary Group on Arts, Health and Wellbeing (culturehealthandwellbeing.org.uk) and form part of our current arts strategy for the trust”.