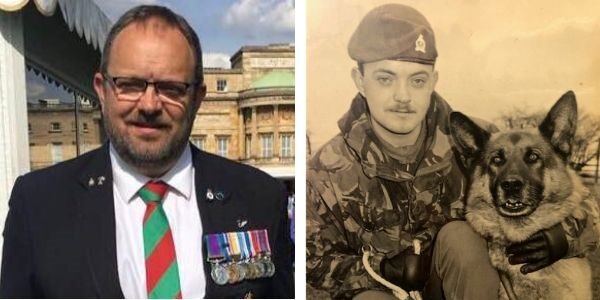 Martin Brimacombe had a varied army career spanning 24 years but finds his job with Oxford Health and in particular mental health is ‘hugely rewarding.’

After a 24 year career in the British Army, Martin Brimacombe found life in civvy street one of his biggest struggles until a job opportunity with Oxford Health gave him ‘a new sense of purpose’.

A sergeant in the Royal Pioneer Corps, his service has taken him posted all around the world and seen him on operational tours of Northern Ireland, Bosnia, Cyprus, Kuwait and Iraq.  Martin’s accomplished a range of roles included dog handler, helicopter crewman and aircraft refueller to a movement controller.

And his last two years in saw him posted to Bicester Garrison Support Unit as Provost Sergeant responsible for the security and discipline.

But his service also came at a price. Conflicts saw him sustain some serious spinal injuries, among others, and he underwent rehab at Headley Court, the UK’s leading rehabilitation centre for injured soldiers wounded in conflict.

Physical pain combined with depression, anxiety and PTSD meant pursuing his chosen career in security and his employability was limited.

However, Martin came across Oxford Health’s Step Into Health programme and went along to an induction briefing and hasn’t looked back. He applied and was offered a position as an asset analyst, but after just three days into the role demonstrating the breadth of his capabilities, he was asked to consider a job as the Estates Officer.

“I decided upon Oxford Health as a new career path. A structured and professional organisation, something that we as service leavers and veterans are accustomed too.” He said.

Martin is now responsible for a team of 10 maintenance staff and local contractors responding to planned and routine maintenance of trust property.

Martin, who is married with a grown up son, said: “Getting the job with Oxford Health and in particular mental health has been hugely rewarding.

“I help in whatever way I can to ensure patient safety is maintained to a high standard for the trust, staff and patients. When I have achieved something I go home with a little accomplishment on my mind.”

When asked how his army skills have helped with the day to day challenges, he explained: “Strengths drawn on daily are the organisational skills and dealing with difficult complex situations. I get the job done to the best of my ability and to a high standard.

“Working for the Trust has been very reassuring for me. Its offered job security. It’s also been very similar with time served in the forces, working for a team as a team member, leading a team and being left alone to be able to get on work in a timely manner.”

Martin’s work with veteran support groups led to him being invited to Buckingham Palace last year by the Not Forgotten Association. He endorses the rewarding and often challenging work at the Trust: “I really do recommend the service offered to veterans, families and service leavers through the Step Into Health program.

“It’s great to be a member of a team of professionals again. With great job security, salary and pension benefits.”

For information about joining other NHS Trusts you can visit the Military Step into Health here: www.militarystepintohealth.nhs.uk/

If you have served in the armed forces, and are feeling low, angry, anxious or distressed, you may find talking therapy effective in overcoming these difficulties. Traumatic experiences in action can affect lives years later, and clinicians at Talking Space Plus (the Oxfordshire free NHS IAPT service) are trained to work with people from a range of backgrounds, including Veterans:

Some Veterans may wish to access The Talking Space Plus Service, others may prefer to contact the Op COURAGE Veterans Mental Health and Wellbeing Service for support, which is a specialist service that has been developed by the NHS nationally: